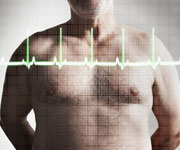 Measuring iron is one of a number of additions and changes to the guidelines made in response to recent findings.

Professor Henry Krum, professor of medicine and director of the Centre of Cardiovascular Research and Education in Therapeutics at Monash University, Melbourne, said measuring iron was currently not uppermost in most doctors’ minds when treating patients with CHF.

“It is under-appreciated as something that is reversible and can benefit the patient,” he said. “But the literature on iron deficiency is quite compelling regarding giving iron replacement to improve symptoms and quality of life.”

Professor Krum was commenting before the release today of a 2011 update to the guidelines for the prevention, detection and management of chronic heart failure in Australia, published in an eMJA Rapid Online Publication. (1)

The update says iron deficiency is common in patients with CHF and is usually associated with anaemia. “A recent study has demonstrated reduced symptoms and improved submaximal exercise tolerance and quality of life with use of intravenous ferric carboxymaltose (in addition to standard therapies) in iron-deficient patients with CHF,” the new guideline says.

Professor Krum, a consultant physician at the Heart Centre, Alfred Hospital, said that based on international estimates, there were about 400 000 patients in Australia with symptomatic heart failure.

He said another new recommendation was that B-type natriuretic peptide (BNP) or N-terminal proBNP plasma level measurements could be used by GPs and specialists to guide titration of drugs in CHF patients.

If a patient had not adequately responded to conventional management, doctors could use this to measure the response to changes in therapy, he said.

“Most people manage heart failure by titrating to patient symptoms, but this strategy is titrating to BNP levels. It is flagging that you may need to be more aggressive based on the blood level.”

However, this test was not routinely done, he said.

“My practice is to order an occasional BNP just to make sure things are tracking in the right direction, maybe once every 12 months, unless a change in clinical status suggests more frequent testing,” Professor Krum said.

Another addition to the guidelines is a recommendation on fish oils.

Professor Krum said omega-3-acid ethyl esters, or fish oils, had been shown in a recent trial to be of benefit to CHF patients. “And it is a pretty safe and innocuous substance,” he said.

There was also more information available to support the use of exercise as a therapy in heart failure.

“The evidence supporting the benefits of regular physical activity in people with CHF, particularly among middle-aged patients with systolic heart failure, has strengthened in recent years,” the update says.

Other major changes in the update were a broadening of recommendations for use of devices such as in cardiac-resynchronisation therapy (CRT), Professor Krum said.

New drugs included a β-blocker called nebivolol, which had been found to be safe and effective in a trial of elderly patients and is now approved in Australia for use in patients with stable CHF.

There were also new findings on an aldosterone receptor antagonist from a trial published late last year, which suggested it was beneficial in patients with mild symptoms of heart failure, Professor Krum said. The drug used in the trial, eplerenone, had not yet been approved for use for this indication in Australia by the Therapeutic Goods Administration but doctors might wish to prescribe it off-label, he said.

“It is standard that the guidelines would be ahead of the drug approval process,” he said.

Professor Krum said it would be useful for guideline updates to be published regularly online. Some updated recommendations were out of date by the time they were published because new data from trials became available in the interim.

“We need a much more responsive system to the evidence as it occurs,” he said.

One thought on “Iron highlighted in new CHF guidelines”