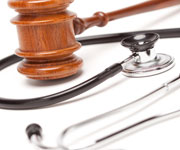 ABOUT 60% of all medical indemnity claims occurred in the public sector in 2007–08, and obstetricians and gynaecologists and GPs were the most likely specialists to have claims made against them, according to a report released last week by the Australian Institute of Health and Welfare (AIHW). (1)

The report, Public and private sector medical indemnity claims in Australia 2007–08, said 97% of claims occurred in a public hospital or day surgery, with fewer than 2% in community health centres and residential aged care.

Of the total 8555 claims open in the period, there were 1439 involving obstetrics and gynaecology and 1419 involving general practice.

The report presents results from the Medical Indemnity National Collection (MINC), a body established by federal and state governments in 2005 to manage the development and administration of medical indemnity data in the public and private sectors.

The AIHW report is the fourth in a series that started with figures from 2004–05.

The 2007–08 report is the first to publish data on the number of claims that were open, including new claims, closed claims and ongoing claims. It showed that of the 8555 open claims, 2776 (32%) occurred in private health services including private hospitals or day surgeries, and private medical clinics.

Procedures were the most common incident that led to a claim, accounting for 27% of all claims, followed by diagnosis (about 20% of claims) and treatment (14%).

The report found that in the clinical specialties of general surgery, orthopaedic surgery and obstetrics and gynaecology, the proportion of claims for procedures was two–three times higher than the total number of claims for those specialties. For example, with procedure-related claims, 32% were associated with obstetrics and gynaecology, but 17% of total claims related to O&G.

In the case of incidents related to general duty of care, psychiatry and general nursing attracted the highest proportion of claims.

Consent incidents comprised a small proportion of the claims made, except in private hospitals and day surgeries, where it was associated with 10% of all claims.