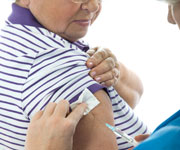 MORE widespread reporting by health professionals and the public of adverse reactions to the seasonal influenza vaccine is expected in the wake of last year’s spate of febrile convulsions in young children after vaccination.

The Federal Chief Medical Officer, Professor Jim Bishop, said the current passive surveillance reporting system clearly worked but it would work better if there was more awareness of it.

His comments coincide with the start of the National Immunisation Program (NIP) tomorrow (15 March) for this winter and a public debate over the lack of evidence available for flu vaccinations of people without risk factors. (1)

A leading Australian infectious diseases clinician sparked the debate, saying there is a deficiency of safety data for the flu vaccine in people without risk factors. (2)

Professor Bishop said the federal government may need to make general practitioners, nurses and the general public more aware of the need to report adverse reactions to the vaccine.

“One of the options would be that we should encourage people to know about the reporting system, to use it, and we should make it more transparent in terms of making sure people can see what is being reported more quickly,” he said.

A TGA spokeswoman said given the experiences of last year, an active surveillance program was being adopted for any new influenza vaccines coming onto the market.

Use of CSL vaccines Fluvax and Fluvax Junior were suspended last year after they were associated with increased frequency of fever and febrile seizures in vaccinated children aged 6 months to 4 years.

The TGA spokeswoman said CSL had not applied this year for registration of Fluvax for children under 5 years of age and the TGA had compelled CSL to undertake active surveillance of children aged 5–18 years vaccinated with Fluvax.

“This will consist of CSL undertaking a monitoring regimen of 600 children for the first 3 days after vaccination,” she said. “Parents of children enrolled in the program will be contacted and asked about potential adverse events that occur over that time.”

This winter Australia will use the same trivalent vaccine formulation as last year (either Vaxigrip by Sanofi Pasteur or Influvac by Solvay), which protects against swine flu (pandemic H1N1 influenza), influenza A H3N2 strain and influenza B. Annual vaccination is recommended as protection lasts for only 1 year.

However, the Australian Technical Advisory Group on Immunisation (ATAGI) recommends vaccination of all people over the age of 6 months, including those who do not have medical conditions that place them at increased risk.

Professor Peter Collignon, director of infectious diseases at Canberra Hospital and professor of microbiology at the Australian National University, said people with underlying disease such as heart or lung disease should have the flu vaccine, but he queried whether everyone over the age of 6 months without risk factors should have it, because there was a deficiency of safety data.

“It is like most drugs, there is a lot of hard work done before they are marketed but then there is only passive surveillance,” he said.

“If you are going to immunise millions of people, surely for a couple of thousand of those people you can make an extra effort and collect a bit more information for the first week afterwards,” he said.

The Australian taxpayer was spending about $300 million each year to fund the seasonal flu vaccine. “So surely it is in your interest to spend $1 million or $2 million a year to check that it is safe and that it works,” Professor Collignon said.

Professor John Mathews, a professorial fellow in the University of Melbourne’s School of Population Health and a former federal health official, said an up-to-date national register was needed of all people who received the flu vaccine to estimate the number of deaths prevented by the vaccine, particularly in elderly people.

There had been claims that vaccination reduced overall mortality in the elderly by about 50% but that was a “big claim” and some experts said it was an artefact because the frail elderly were not vaccinated and they were more likely to die anyway, he said.

“It is really quite important to know whether the benefit of the vaccine is as big as has been claimed,” Professor Mathews said.

Dr Alan Hampson, chairman of the Influenza Specialist Group, encouraged doctors and other health professionals to have the flu vaccine every year.

“I think it really is irresponsible of health care providers not to be vaccinated, because they are the interface with a lot of the high-risk population,” he said.

3 thoughts on “Calls for close watch on flu vax”