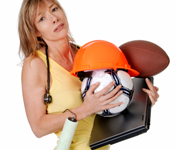 DOCTORS should keep an eye on colleagues who appear to be lacking enjoyment in their work as they may be headed for burnout, says a leading Australian medical educator.

“So if a colleague is dissatisfied, grumpy or angry, sad or behaving in a way that is out of character [such as] taking risks, consider burnout,” said Professor Simon Willcock, head of general practice and associate dean for postgraduate medical education and training at the University of Sydney.

He was commenting on a US study of about 7900 American surgeons that found more women than men surgeons had burnout and depressive symptoms although there was no difference in hours worked or number of nights on call.

The study in the Archives of Surgery found factors independently associated with burnout included recent experience of a work-home conflict, resolving the most recent work-home conflict in favour of work, and the number of hours worked per week. (1)

“Work-home conflicts appear to be a major contributor to surgeon burnout and are more common among women surgeons,” the authors said.

Professor Willcock, who is also on the management committee of the Doctors’ Health Advisory Service, said the study suggested that although the workload for male and female surgeons seemed to be equivalent, female surgeons were more susceptible to stress associated with balancing work and home roles.

“This is not surprising although I know that many successful female Australian surgeons resolve this by making sure that they have adequate domestic support,” he said.

Professor Geoff Riley, head of The Rural Clinical School of Western Australia and former head of psychiatry at the University of WA, said if a doctor suspected a colleague was suffering burnout, they should approach them directly and raise the subject with them.

If the doctor felt too junior, they should raise it with another doctor who was a peer of, or senior to, the colleague.

Professor Riley said burnout was usually the result of something else going on in a person’s life, such as major stresses at home or in the marriage, increased use of alcohol, or the emergence of depression.

“What do you do about that? The same ― either you, or someone else, needs to broach the topic directly with the individual.”

He said doctors who noted burnout in a colleague need not be concerned about the mandatory reporting requirements of the Medical Board of Australia. The threshold for mandatory reporting was high and only applied if a doctor’s poor performance was clearly related to a disability, such as alcoholism, Professor Riley said.

Professor Willcock said burnout, as defined by the Maslach tool used by the US authors, was a risk for all medical practitioners, regardless of their work domain.

But the depersonalisation component of burnout ― emotional insensitivity ― was more common among practitioners such as surgeons who had to distance themselves from the emotional features of a patient’s problems, particularly when they were operating under emergency circumstances.

“There is a risk of taking this depersonalisation style into the other aspects of their lives, such as family or standard patient consultations,” Professor Willcock said.

A study he was involved in showed that burnout levels first rose significantly during internship and could remain high indefinitely. (2)

“Part of a medical career is about recognising the potential for burnout, which is always present when you’re dealing with illness and distress, and developing strategies to mitigate it,” he said. “Fortunately, burnout is very manageable through appropriate personal care strategies.”

WA surgeon Professor Christobel Saunders, deputy head of the school of surgery at the University of WA, said surgical training in Australia differed from that in the US, with possibly fewer hours and more controlled environments.

She said female generation X surgeons in Australia probably did not feel they experienced more work‒home conflicts than their male colleagues because both had similar desires for lifestyle options.

However, women surgeons generally had a unique position at home due to both child rearing and domestic responsibilities, Professor Saunders said.

One thought on “Keep watch for burnout”