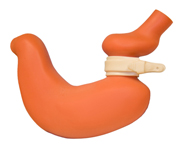 Gastric banding a “no brainer”

AUSTRALIAN experts have dismissed as flawed a US study finding that suggests gastric bypass surgery is superior to lap banding for weight loss and control of type 2 diabetes, with one surgeon saying it is a “no brainer” to prefer lap banding.

One obesity expert, Associate Professor John Dixon, has called for greater access to bariatric surgery in public hospitals, based on the successful outcomes of surgery performed in Australia.

Professor Dixon, head of the Obesity Research Unit in the Department of General Practice at Monash University, said that currently in Australia “we neglect Australians suffering from” obesity and type 2 diabetes.

The matched-cohort study in the Archives of Surgery looked at 1-year outcomes for 93 patients who underwent laparoscopic adjustable gastric banding (LAGB) and 92 who had laparoscopic Roux-en-Y gastric bypass (RYGB).(1)

After 1 year the RYGB group had better measures for excess weight loss (64% versus 36% for LAGB), resolution of diabetes (76% versus 50%) and quality-of-life outcomes.

Professor Paul O’Brien, a bariatric surgeon and emeritus director of the Centre for Obesity Research and Education at Monash University, Melbourne, said LAGB required a commitment to good patient care after placement of the band. Without that, results were poor.

“This group [of researchers] are RYGB surgeons who are not that familiar with the band,” he said.

Surgeons in Australia would expect patients to have 50% excess weight loss at 12 months with LAGB, Professor O’Brien said.

“RYGB is at its best at 12 months, tends to stay steady for another year and then fades in effectiveness,” he said.

“LAGB is only halfway to its peak at 12 months, generally is best at 2–3 years and remains durable beyond because it is adjustable. RYGB is not.

In a randomised, controlled trial published in JAMA in 2008, a 73% remission rate for type 2 diabetes at 2 years was achieved using LAGB compared with 13% in conventional diabetes care, Professor O’Brien said.(2)

He said cost effectiveness had not been properly measured for RYGB. However, LAGB-induced weight loss to manage type 2 diabetes in obese patients had been shown to increase quality-adjusted life years at a decreased cost to the health care system.

Professor Dixon said the US data were short term and it was already known that the early weight loss with RYBG was far more extensive and rapid than with LAGB.

“RYGB is technically challenging, more dangerous in both its early and late complications and has significant long-term nutritional issues,” he said.

He said Australian surgeons preferred LAGB because of its excellent results.

“Of course, lifestyle programs need to be tried first but to do this over and over again is not needed. Surgery should be seen as an effective, safe and cost-effective therapy for a serious chronic disease,” he said.

WA surgeon Professor Jeff Hamdorf, head of surgery at the University of WA and director of the Clinical Training and Education Centre (CTEC), the medical and surgical skills training centre at UWA, said RYGB was often done as a salvage procedure rather than a primary procedure.

“The Americans just can’t seem to get results [with LAGB] which match Australian groups. Weight loss of 36% to 38% is actually OK at 12 months [because the weight loss] keeps on going.”

In Australia, gastric banding can be used to treat people with a BMI of at least 30 and an obesity-related disease such as diabetes.

6 thoughts on “Gastric banding a “no brainer””