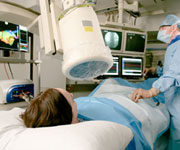 LEADING cardiologists have called for zero radiation diagnostic tests in preference to radiation-based investigations because of the risk of cancer.

The experts’ comments follow the publication of a study which found a dose-dependent relationship between exposure to low-dose ionizing radiation from cardiac imaging and therapeutic procedures and the subsequent risk of cancer.(1)

The study, published in the Canadian Medical Association Journal, found that for every 10 milliSieverts (mSv) of radiation, there was a 3% increase in risk of age- and sex-adjusted cancer over a follow-up period averaging 5 years.

The study involved 82 861 patients who had an acute myocardial infarction and no history of cancer. Of these, 77% underwent at least one cardiac imaging or therapeutic procedure involving low-dose ionizing radiation, such as nuclear scans, diagnostic cardiac catheterisation and percutaneous coronary intervention.

The cumulative exposure to radiation from cardiac procedures was 5.3 mSv per patient-year, of which 84% occurred during the first year after the heart attack. A total of 12 020 incident cancers were diagnosed during the follow-up period.

The authors said even moderate levels of exposure were associated with an increased risk of cancer.

“We should at least consider putting into place a system of prospectively documenting the imaging tests and procedures that each patient undergoes, and estimating his or her cumulative exposure to low-dose ionizing radiation,” they said.

Professor Harper said there had always been an unspoken suspicion among cardiologists that sufficient exposure to cardiac procedures involving radiation could increase a patient’s risk of cancer and that the study was the first to provide evidence this could be the case.

Dr Rivers, SAMI’s chief investigator for a Queensland government-funded project to improve clinical outcomes for cardiology patients, including systems to reduce radiation dose, said there was no doubt patients with acute coronary artery problems are generally required to undergo procedures such as angiography and angioplasty.

“The area that requires more thought is routine use of radiation-based investigations,” he said.

He advocated echo stress testing first and then ultrasound, saying nuclear stress testing should only be used if no information was derived from these tests.

There had been huge growth in cardiac imaging, with nuclear cardiac perfusion scans in the United States growing from less than 3 million in 1990 to 9.3 million by 2002, he said.

The introduction of computed tomography coronary angiography (CTCA) and routine uses of CT scans for other testing had been a major contributor to increased radiation dose, he said.

Dr Rivers said SAMI was developing benchmarks for radiation doses for cardiac procedures and had been in discussion with the Australian Radiation Protection and Nuclear Safety Agency (ARPANSA) about national benchmarks.

“Our research shows that measuring the dose and reporting that back to clinicians is quite a powerful tool for getting them to reduce the dose,” he said.

“We also need to look at the cumulative dose [of radiation]. A patient doesn’t have one test; they often have multiple and repeat investigations and no system tracks their total dose.

“And the age at which the radiation dose is received may also be important. We should be extra vigilant with young patients.”

Professor Harper said the study was a good wake-up call for cardiologists to limit their cardiac procedures.

He reiterated a call he made recently, in a viewpoint in the eMJA, for nuclear stress tests to be eliminated and the Medicare item number abolished.(3)

He said there should be greater reliance on the standard electrocardiogram (ECG) stress test, with echo stress tests used when patients had a resting ECG abnormality or were unable to exercise.