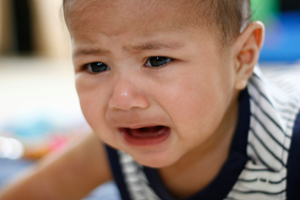 CHILDREN with croup start to improve within 30 minutes of receiving an oral corticosteroid, which is much faster than previously thought, according to new Australian research.

After 10 minutes, the “Westley” croup scores of the children in the immediate dexamethasone treatment group were already trending lower than those in the placebo group. By 30 minutes, the difference in croup scores had reached statistical significance.

The results were presented at last week’s annual scientific meeting of the Australasian College for Emergency Medicine held in Sydney.

The study found thatdexamethasone for croup worked much faster than reported by a recent Cochrane Review, which stated that “dexamethasone and budesonide are effective in relieving the symptoms of croup as early as six hours after treatment.” (1)

The Cochrane Review found that the optimal dose of oral dexamethasone lay somewhere between 0.15mg/kg and 0.6mg/kg, but the Perth study found that the lower dose was effective.

Lead researcher Professor Gary Geelhoed, director of the emergency department at Princess Margaret Hospital, said he was prompted to run the trial because his clinical observations and previous research suggested that children were benefitting much faster than the Cochrane Review suggested.

He said clinicians were sometimes reluctant to use corticosteroids for croup because the infection usually resolved within 24-48 hours. However, his study results may encourage greater use of the effective treatment.

“I think knowing that the drugs will start working in the first hour, doctors may be more likely to use them”, he said.

Professor Geelhoed said the results may also have implications in rural areas where doctors need to make quick decisions about whether to intubate or evacuate young patients.

Professor Dominic Fitzgerald, a paediatric respiratory physician at the Children’s Hospital, Westmead, in Sydney, said the research was reassuring for clinicians and patients.

“It’s an important finding which is good news for children with croup and doctors looking after them in the emergency department”, he said.

“It should be another factor encouraging doctors to use the lowest dose of these quite potent drugs for treating croup.”

While the Perth study is the first to identify a benefit of an oral corticosteroid within 30 minutes, Professor Fitzgerald coauthored a paper 15 years ago which found that nebulised budesonide worked within 30 minutes. (2)

However, Professor Fitzgerald said oral steroids should be the first-line treatment for croup.

he research group at Princess Margaret Hospital had published a series of papers on croup in the past 15 years that found lower doses of dexamethasone were as effective as higher doses. These studies also showed that steroids reduced the need for adrenaline, reduced the length of hospital stay, and reduced rates of return to hospital among children with croup.

Professor Geelhoed said using steroids in children was once controversial but was now known to be an effective treatment for this frightening respiratory condition.

“It relieves the symptoms. Having croup is not very pleasant for kids, or for parents who have to watch their children struggling to breathe”, he said.