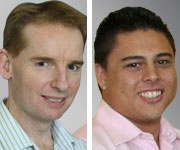 DOCTORS have long sought a pharmacological solution to complex behavioural problems in children and, in recent years, the antipsychotic agent risperidone has emerged as one accepted treatment.

The drug was approved in Australia in 2005 for the treatment of conduct and other disruptive behavioural disorders in children over 5 years of age with sub-average intellectual functioning or mental retardation.

We recently reviewed the evidence for the efficacy and safety of risperidone in children with conduct disorder, oppositional defiant disorder and attention deficit disorder, together broadly termed disruptive behavioural disorders (DBD).

Our review identified seven randomised controlled trials in 657 children and adolescents with a mean age of 9.9 (SD = 2.0) years (range 4 to 18 years). All studies showed risperidone was efficacious in reducing symptoms of DBD.

However, clinicians need to be cautious about generalising these findings to their clinical practice.

In contrast to the longstanding nature of DBD in children, six of the studies were conducted over a period of 10 weeks or less, with three of these being only 4 weeks in duration. The one study of longer duration examined the efficacy of risperidone in a selected group of children with DBD who had already responded favourably to this medication.

Weight gain was the most common adverse effect of risperidone. In a retrospective cohort study of more than 4000 children, second-generation antipsychotic medication was associated with more than twice the risk of obesity and three times the risk of type 2 diabetes.

Of further concern, patients prescribed antipsychotic medications are reported to have a twofold risk of sudden cardiac death. Overall, the potential metabolic and cardiovascular adverse effects of risperidone are substantial.

Non-pharmacological interventions are preferable for management of disruptive behavioural disorders in children and adolescents.

The long-term efficacy of parent-training interventions for treatment of children with externalising problems has been established. Multisystemic therapy and other family interventions are effective for reducing problems associated with conduct disorder in adolescence.

Prevention of disruptive behavioural disorders is the gold standard. In the US, a nurse home visits program in infants and an individual family check-up in the preschool years are effective in reducing behavioural problems in later childhood.

Although it has been established that risperidone has good efficacy for reducing symptoms of DBD in the short term, its effectiveness over longer periods has not been determined and there are now significant questions in relation to safety.

In light of this, clinicians need to inform their patients (and parents) of the limitations of the evidence and the potential risks of using risperidone in the treatment of children with DBD.

Urgent investment is needed to make non-pharmacological interventions with established efficacy available to Australian families to prevent the onset and to reduce symptoms of disruptive behavioural disorder.

One thought on “James Scott”