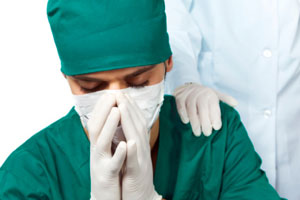 SOME doctors are misusing the new mandatory reporting requirements for their own personal agendas, according to a medical defence organisation and other anecdotal reports.

The reports have led to calls for doctors who misuse mandatory reporting to be subjected to penalties.

Since 1 July 2010, all registered health professionals have been required to notify the Australian Health Practitioner Regulation Agency (AHPRA) if they have a “reasonable belief” that another health professional has placed the public at substantial harm.

In a comment article in this week’s MJA InSight, the chief executive officer of Avant, David Nathan, says that a quarter of members’ requests for support on mandatory reporting come from doctors who have been reported to AHPRA. (1)

“Unfortunately, several of these cases involve an undertone of market competition or a personal agenda driving the making of such reports”, Mr Nathan wrote.

Dr Mukesh Haikerwal, chair of the World Medical Association and former president of the AMA, said he was also aware of cases where reports had been made “not in good faith”.

In a submission to a Senate inquiry into AHPRA in May this year, Dr Haikerwal said the threshold to trigger a mandatory notification was low. (2)

“It follows that the mandatory notification process is potentially open to abuse by claims made in bad faith with the intention of adversely affecting the registration states and the subsequent employability of a health practitioner.”

In his submission, Dr Haikerwal outlined the case of an overseas-trained doctor who was reported to AHPRA by a former employer.

Dr Haikerwal says the reported doctor was issued with “show cause” documentation before any investigation into the legitimacy of the notification started. AHPRA also told Dr Haikerwal that the accused was a “dangerous doctor” who was not expected to be permitted to practice again.

Although the doctor was finally exonerated, Dr Haikerwal says the case left him in a state of “shell shock”.

He says APHRA was unable to determine whether the matter was reported in good faith, but the legal team handling the case for the notified doctor believed it was not.

Dr Steve Hambleton, president of the AMA, said cases like this were “reprehensible” and called for penalties for health professionals who misuse the mandatory reporting system.

“If there’s abuse of process, penalties need to be sanctioned”, he said.

Dr Joanna Flynn, chair of the Medical Board of Australia, said there were legal processes to deal with health professionals who made notifications “not in good faith”, for instance, such doctors could be sued.

Additionally, if the board felt that the notification amounted to unprofessional conduct they could take disciplinary action.

Dr Flynn said she was not aware of any cases where mandatory notifications against medical practitioners had been made due to a personal agenda.

“I have come across some cases where it’s been alleged by the doctor who has had the notification but nothing has been substantiated”, she said.

“On the whole, it would appear that mandatory notification is bringing things to the attention of the board that are appropriate.”

The Senate inquiry into AHPRA heard that a doctor took his own life after his treating psychiatrist reported him to AHPRA in line with mandatory reporting requirements.