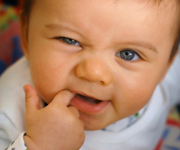 DOCTORS, nurses, pharmacists and families should be warned of the dangers of intoxication in infants caused by teething gels containing salicylate, according to a group of medical specialists.

An article published in “Lessons from Practice” in the latest MJA described two cases of infants with chronic toxicity which confounded medical practitioners treating the children until the link to teething gels was discovered.(1)

The cases highlighted the value of taking detailed medication histories for people presenting with unexplained intoxication.

The specialists — Dr Gary Williams, a paediatric intensivist, and Dr Edwin Kirk, a clinical geneticist, both at Sydney Children’s Hospital, Dr Betty Chan, an emergency physician and toxicologist at the Prince of Wales Hospital, Sydney, and Dr Callum Wilson and Dr Caroline Meadows, paediatricians from New Zealand — said warnings were currently not present on several salicylate-containing gels marketed for infants in Australia and NZ.

They said there had been several cases of salicylate intoxication by unintentional overdose of teething gels reported to the NZ National Poisons Centre.

“It is important to appreciate that dosing of this gel directly from the tube is potentially inaccurate, increasing its risks of causing chronic toxicity,” the authors said.

In one of the two cases outlined in the article, a 7-month-old boy presented with a 24-hour history of restlessness, tachypnoea, poor feeding and vomiting.

The infant’s medical history was unremarkable, his body weight was normal and there was no family history of note.

The family said he had not been given any medications apart from paracetamol.

Intravenous dextrose and oral multivitamins were administered, as well as IV bolus doses and continuing infusions of sodium benzoate and arginine.

However, over the following 8 hours the infant’s conscious state deteriorated and he required intubation. Over the next 12 hours, with a regimen of urine alkalinisation and potassium supplementation, his condition improved and he became more interactive and responsive.

The following day a detailed examination of the family’s home medicine cupboard revealed teething gel containing 8.7% choline salicylate, which the family admitted to frequently using on the infant’s gums in the previous 2 months.

It was estimated he received about 60 mg/kg of salicylate each day.

Seventy-two hours after admission the infant was discharged with normal neurological signs.

In the other case a 13-month-old girl had shown gradual deterioration in weight since 9 months of age.

Persistent questioning led to the family admitting to frequently giving the child teething gel containing 8.7% salicylate over several months and, on occasion, using a whole tube at night to settle her.

She also made a good recovery after treatment and her normal growth pattern resumed when the gel was stopped.

The authors said that as the Therapeutic Goods Administration in Australia regards teething gels as “therapeutic goods” they should be subject to the requirement that labels of over-the-counter aspirin-containing products include a warning statement.

One thought on “Poison risk from teething gels”