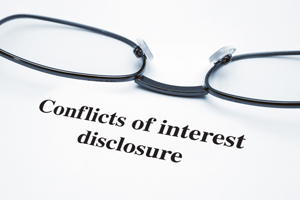 CLINICAL practice guidelines are vulnerable to bias, with only 15% of NHMRC guidelines from Australia’s most prolific guideline developers including a declaration of conflicts of interest, new research has found.

Although a conflict of interest (COI) statement has long been required from authors of research papers, it is often lacking for developers of clinical practice guidelines, despite the influence of guidelines on clinical care.

The research, in the latest issue of the MJA, looked at more than 200 clinical guidelines that were listed on the NHMRC website. Its authors concluded that the NHMRC needed to “urgently promote a more ethically sound development process for guidelines”. (1)

“Guidelines are valuable and vulnerable”, the authors, led by Michael Williams, a researcher from the Michael Kirby Centre for Public Health and Human Rights at Monash University, wrote.

“Our review of the country’s most prolific guideline developers shows that only 15% of guidelines have COI statements”, they said.

“This raises questions about whether medical bodies are affected by unrecognised, and thus unaddressed, extraneous interests, and may erode the trust the community has in the profession to speak authoritatively about health problems.”

The authors said individuals, institutions and professional bodies could have COIs, with the most common being financial links to industry, such as being paid consultancy fees or honoraria, or holding company shares.

They proposed a six-step process for improving COI disclosure and suggested that the NHMRC should list whether existing guidelines contained a COI statement, and require a COI declaration for future guidelines.

The NHMRC should “prioritise the provision of updated advice on appropriate management and disclosure of COIs in guideline development”.

The problem of disclosure is international, with a North American study published in the BMJ showing that more than half of panel members producing guidelines on hyperlipidaemia or diabetes had conflicts of interest. (2)

This study also found that there was some underreporting of COIs. Among 73 panellists who formally declared no conflicts, 8 (11%) were found to have one or more.

“One suggested remedy is that guideline committees should be composed of only those who have no conflicts of interest”, an accompanying BMJ editorial said. (3)

“There is a charming sense of unreality about this suggestion — money from drug companies is the oxygen on which the academic medical world depends”.

What was needed was a change in the culture of medicine “in which serving two masters becomes as socially unacceptable as smoking a cigarette”, the BMJ editorial said.

Discussing the Australian findings, MJA editor Dr Annette Katelaris said the fact that only 15% of guidelines had COI declarations was surprising. (4)

She said the MJA would continue in its role as a repository of clinical guidelines.

“We already insist on a full conflict of interest statement for each contributor, and all guidelines published in the MJA are peer reviewed”, Dr Katelaris said.

2 thoughts on “Guidelines — “valuable and vulnerable””