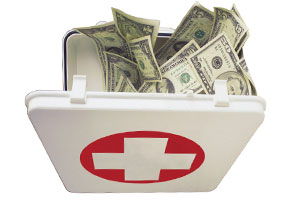 In new research, they have examined the frequency and costs of these activities, which were believed to be common in primary care but of little benefit to patients. The findings were published in Archives of Internal Medicine. (1)

Prescribing expensive (non-generic) statins accounted for $US5.8 billion or 86% of the US$6.76 billion wasted each year on unnecessary clinical activities in primary care in the US.

“Our data suggest that considerably more work is needed to reduce the costs associated with brand name statin use”, the researchers said.

Ordering a complete blood cell count for patients undergoing a general check-up was the most common activity and cost $US32.7 million annually.

Prescribing antibiotics for children with a sore throat was very common and cost US$116.4 million and ordering a CT, MRI or x-ray for acute back pain racked up US$175.4 million in excess costs.

Professor Chris Del Mar, professor of public health at Bond University, Queensland, said costs were not likely to be very different between the two countries, although Australia funded drugs differently.

In the US there is better protection of the pharmaceutical industry and a more open market, whereas in Australia pharmaceuticals are bulk purchased for the population through the PBS.

“Could we be improving quality of care while spending less? For sure”, he said.

“Apart from anything else, we might reduce patient anxiety, reduce our workload, and enable the surplus in time and money … to be spent on people and treatments that really cause benefit.”

The research also found that bone density testing in women younger than 65 years was the least prevalent activity of the top five, but cost $US527 million annually.

Professor Del Mar said doctors often continued doing things that had previously worked, even though outcomes might be identical if they stopped, perhaps because of the natural history of the illness.

“It’s often easy to busy oneself treating a surrogate outcome such as a DEXA scan without stopping to look at the absolute benefit of the management”, he said.

Professor Del Mar said the RACGP’s guidelines for preventive activities in general practice (the Red Book) — of which he is a coauthor — were probably quite effective in helping curtail some unnecessary investigations.

“We often assume, and are sometimes wrong, that patients want us to do something”, he said. “It seems to be especially hard for doctors to adhere to the principle, ‘Don’t just DO something! Stand there!’

“Sometimes we are much better doctors by protecting our patients from too much technology when there isn’t good evidence for its benefit.”

Professor Del Mar said the Australian top five lists were likely to be different because generally fewer investigations, particularly “routine” investigations such as annual ECGs, were undertaken in Australia than in the US.

Associate Professor Lyndal Trevena, of the School of Public Health at the University of Sydney, said an underexplored issue was community attitudes to rational test ordering.

“I think … patients are not aware of the costs of many of these tests and we don’t have any good data on patient expectations or knowledge on this matter”, she said.

“I suspect many GPs are under or feel under pressure from some patients to order tests which can be quite costly to the taxpayer.”