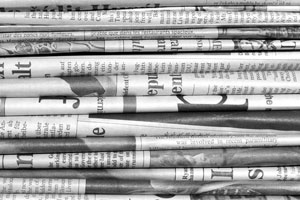 Dr Amanda Wilson, a public health researcher at the University of Newcastle, NSW, and editor of Media Doctor Australia, said there was a “slight hypocrisy” in the fact that the media were usually blamed for biased reporting, when researchers were often the ones providing information for stories.

“Researchers and scientists need to be more aware of what they’re saying. Certainly journalists are going to report the most sensationalist statements, but they are given those statements by researchers”, she said.

Journalists also had a role to play in improving the quality of media stories, such as by asking researchers about negative findings and seeking independent comment.

Dr Wilson’s comments come in response to new research in the MJA which looked at the portrayal of psychiatric genetics in the print news media from 1996 to 2009. (1)

One of the key findings was that news stories tended to “overpromise” the clinical benefits of psychiatric gene research.

The analysis identified 22 predictions about psychiatric genetic discoveries and potential treatments, 20 of which failed to manifest by the year predicted. Most of the predictions were attributed to statements from researchers or academics.

Dr Wilson said these findings correlated with trends she had seen at Media Doctor. She said scientists stood to gain from biased media reporting. What was not made clear in articles was that researchers had a great deal at stake.

“Researchers are constantly looking out for funding and if you have a publication that has a good media response, then there’s a better chance of being in the minds of the people who make the funding decisions”, Dr Wilson said.

Media Doctor had noted a spike in the number of early phase research stories in the media at the time when bodies such as the NHMRC were making their funding decisions.

She suggested that guidelines governing the ethics of medical research could be extended to cover what researchers say to the media.

Coauthor of the MJA paper, Professor Philip Mitchell, head of the school of psychiatry at the University of NSW, agreed that medical researchers needed to be careful not to oversell their findings to journalists or the public.

Professor Mitchell said “overpromising” the results of studies in the media had implications for doctors, particularly when patients came in asking for treatments or tests they’d read about in newspapers.

“Being a specialist psychiatrist, people write to me saying ‘Can I have this test?’… The difficulty is in explaining that there’s a big gap between what’s reported and something that’s going to be clinically useful”, he said.

The MJA paper also found that the number of stories about psychiatric genetics had steadily increased since 1996.

Professor Mitchell said this was pleasing, particularly as there had been major advances in the field over this time. “There is some substance to the story”, he said.

Among news stories which considered the aetiology of psychiatric illness, most focused on the interaction between genetic and environmental factors, which Professor Mitchell said reflected the reality.

However, he acknowledged that there were some “internal contradictions” in the data. For instance, stories that considered the role of genes in developing mental illness mostly emphasised genetic determinism.

There was also an overall lack of stories exploring the ethical implications of psychiatric genetics.

2 thoughts on “Research oversold to media”