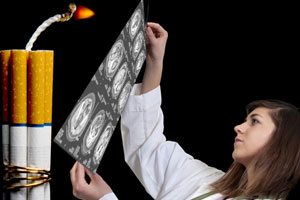 ADDING an antibiotic to the treatment regimen for chronic obstructive pulmonary disease reduces exacerbations, but an Australian public health expert warns that the risks of antibiotic resistance could counteract the benefits.

In the research, published in the New England Journal of Medicine, 1142 participants with chronic obstructive pulmonary disease (COPD) were randomly assigned to receive either 250mg/day azithromycin or placebo for 1 year in addition to their usual care. (1)

In the year before the study, more than 80% of the participants had received systemic glucocorticoids, and 50% had been hospitalised due to an acute COPD exacerbation. The study excluded patients with asthma, a prolonged corrected QT interval or hearing impairment.

However, hearing decrements occurred in 25% of the patients taking azithromycin, compared with 20% of those in the placebo group.

Among patients who became colonised with selected respiratory pathogens during the course of the study, the incidence of macrolide resistance was double in the azithromycin group (81% v 41%).

Professor Chris Del Mar, professor of public health at Bond University in Queensland and a member of the expert group that developed Australia’s antibiotic guidelines for respiratory infections, said it was “a very interesting piece of research”.

However, more information was needed before doctors started putting all their COPD patients on prophylactic antibiotics, Professor Del Mar said. In Australia, antibiotics are currently recommended only to manage exacerbations, but not for prophylaxis.

Professor Del Mar said the increase in macrolide resistance and deafness identified in the study was concerning.

He said a longer follow-up period than the 1 year in this study might reveal more of the implications of the macrolide resistance.

“Whether having antibiotic resistance would pose a threat if someone got a really serious infection like pneumonia is an unanswered question.”

Professor Del Mar said any short-term gains could be offset by the potentially increased difficulty of treating serious infections among patients with macrolide resistance.

He said the research also posed the question of whether the treatment plan could affect antibiotic resistance in the community.

The researchers acknowledged this problem, saying: “It should be recognised that the long-term effects of this treatment on microbial resistance in the community are not known”.