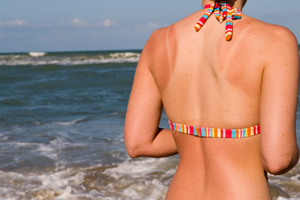 A NEW study shows that while vitamin D deficiency may increase the risk of fractures, it could protect against skin cancer.

The US study, which followed more than 3000 subjects for 10 years, found that people with baseline serum 25-hydroxyvitamin D (25-OHD) levels greater than 15 ng/mL — a level defined as “not deficient” — were significantly more likely than those with vitamin D deficiency to develop non-melanoma skin cancer (NMSC). (1)

Only 20% of NMSCs in the study occurred on body sites not normally exposed to UV radiation. When these cancers were considered separately, the positive association with vitamin D levels remained, but was not statistically significant.

Previous research has suggested that vitamin D protects against some internal cancers. However, evidence on the association between vitamin D and skin cancer has been inconsistent.

The US researchers described the relationship between vitamin D and NMSC as “highly complex”.

They referred to previous research in Tasmania, which found that people aged over 50 years with osteoporotic fractures have a significantly decreased incidence of NMSC.

“The direct relationship of UV exposure with both vitamin D and NMSC makes it a likely profound confounder in this, and other, studies”, they wrote.

Professor Rebecca Mason, a professor of physiology from the University of Sydney who has written extensively on vitamin D, said the research showed that sun exposure was a “trade off” between the risks to the skin of UV radiation and the benefits of vitamin D.

“It does support the concerns that some people have expressed, that getting enough sunlight to produce enough vitamin D may increase the risk of skin cancers”, she said.

However, Professor Mason said that the weight of evidence supports the need for getting enough sunlight to prevent vitamin D deficiency. She suggested that relatively shorter, frequent periods of sun exposure were the most effective because they allowed the body to adapt to the UV radiation and reduced the breakdown of vitamin D produced.

The US researchers found a stronger association between vitamin D and squamous cell carcinoma than basal cell carcinoma (BCC), a finding which Professor Mason said was expected.

“The association between sun exposure and BCC is not quite a linear relationship”, she said.

One limitation of the study was that the vitamin D data were limited to an initial, single serum 25-OHD measurement. The researchers acknowledged that this did not reflect lifetime vitamin D levels.

“25-OHD measurements reflect what has happened over the past 1 to 2 months or so and are not just the product of sun exposure. Nevertheless, they may reflect sun exposure habits”, Professor Mason said.

One thought on “Balancing vitamin D with skin cancer”