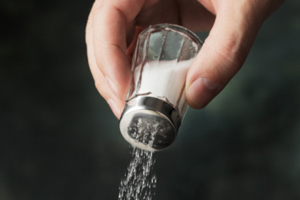 In a pickle over salt reduction

AUSTRALIA’S failure to take appropriate action to reduce sodium consumption at a population level “is bordering on negligent”, according to a public health expert.

However, the federal government says it is already working closely with industry and public health groups to reduce the salt content of a variety of common foods.

The comments come in response to the first study in Australian adults to demonstrate a positive association between sodium intake and blood pressure, published in this week’s MJA. (1)

Sodium excretion and sodium-to-potassium ratio were both significantly and positively associated with systolic blood pressure after adjusting for various confounders such as age, sex, body mass index and country of birth.

Almost all the study participants consumed excessive sodium. Only six men (1.6% of all participating men) and 32 women (7.9%) adhered to Australian recommendations to consume less than 70 mmol of sodium (4 g salt) per day for chronic disease prevention.

Professor Bruce Neal, senior director at the George Institute for Global Health, told MJA InSight that the findings on salt consumption were “disappointing but not surprising”.

“It influences everyone’s health in a bad way. That’s why a salt reduction strategy has such enormous potential”, he said.

A spokeswoman for the federal Department of Health and Ageing said that the government, through the Food and Health Dialogue, had negotiated sodium reduction targets with industry for bread, breakfast cereals, processed meats and simmer sauces, with other foods planned for later inclusion. (2)

However, Professor Neal said this approach was likely to have limited impact because there were no sanctions if industry did not meet these targets. He suggested a model similar to that used in the UK, where targets were more strictly monitored and enforced under stronger leadership from government.

He said the Australian Government would have to invest $10–$20 million a year for a “gold-plated salt reduction strategy”.

A modelling study published in the BMJ last week found that reducing dietary salt intake by 3 g a day in the UK would prevent about 4450 deaths from cardiovascular disease and save £347 million ($515 million) over 10 years. (3)

Professor Neal said although doctors could raise awareness of the link between salt intake and high blood pressure, the food environment made it difficult for most people to substantially reduce their sodium intake.

“Unless you are some sort of weirdo it’s impossible to eat a low sodium diet in Australia because salt is in everything”, he said.

If patients were adding a lot of salt to their food, then doctors could suggest practical changes such as adding less salt or using salt substitutes, he said.

In an editorial in the MJA, Professor Neal questioned why it was so hard to introduce a “plausible population-wide salt-reduction program”.
(4)

“No one is going to lose their parliamentary seat and no one is going to go out of business if they make this happen. There are just going to be a lot of unnecessary strokes and heart attacks while the people pickling us figure this out”, he wrote.

A Cochrane Review of seven clinical trials in which individual patients were advised to restrict salt intake, published earlier this year, found that reducing salt intake had no clear benefits in reducing the likelihood of dying or experiencing cardiovascular disease. Its authors said further studies were needed to determine if more effective or population-based means of salt restriction would be beneficial. (5)

“There remains little debate about the potential for salt reduction to positively impact on human health”, Professor Neal said.

7 thoughts on “In a pickle over salt reduction”