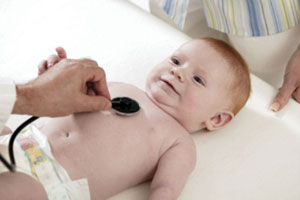 WOMEN considering pregnancy should be made aware of the risks associated with cytomegalovirus infection and the need for infection control, according to experts commenting on new research in the MJA.

Professor Bill Rawlinson, director of virology at South East Area Laboratory Services microbiology department, said everyone was aware of Down syndrome and cystic fibrosis, but CMV was just as common and could have devastating consequences.

Professor Rawlinson was senior author of the research paper, which found that congenital CMV is underdiagnosed and infrequently treated. The researchers used data from the Australian Paediatric Surveillance Unit (APSU) from 1999 to 2009. (1)

Over the 10-year period, only 363 cases of congenital CMV were reported to the APSU, well below the predicted annual incidence of 150 clinically infected infants, which was based on a CMV birth prevalence of around 0.64% and 285 000 annual births.

Of these 363 cases, 195 were classified as definite or probable congenital CMV. Sensorineural hearing loss was present in 51 infants, and was the sole presenting feature in 34 infants. More than half the 195 infants with congenital CMV had neurological abnormalities.

Professor Rawlinson called for a cost-benefit assessment of a CMV screening program in Australia. His preferred model was screening of infants with sensorineural hearing loss or other conditions suggestive of CMV because screening all infants would probably not be cost-effective.

Newborn hearing screening has recently been introduced in most Australian states, enabling identification of a population with high CMV-incidence.

Professor Rawlinson said antiviral treatment had been shown to be effective only in babies with neurological disease, and the benefit of antivirals in babies with less severe disease was not as clear, but research was underway.

The MJA paper said the cost-effectiveness of introducing CMV screening “urgently needs to be determined”.

Professor Rawlinson said there was also a need for improved awareness of CMV infection among pregnant women and those considering pregnancy.

Dr Greg Kesby, a Sydney-based obstetrician and spokesman for the Royal Australian and New Zealand College of Obstetricians and Gynaecologists, agreed there was a need for improved awareness, particularly around infection control.

Dr Kesby and Professor Rawlinson agreed that pre-pregnancy testing to identify women who had not previously had the virus could be particularly useful. These women could then be targeted for education on infection control to minimise their risk of CMV infection while pregnant. There is only a very small risk of CMV recurrence in women who have had the virus.

“One US study shows that if a mother just knows that she is at risk then she is likely to modify her behaviour and reduce her risk of CMV by half”, Professor Rawlinson said.

Dr Kesby said that any educational activities needed to be balanced with the need to avoid raising unnecessary alarm among pregnant women, especially because prenatal CMV testing raised various treatment dilemmas. For instance, there was currently no effective prenatal treatment for CMV (although a vaccine is in development). Testing also had a high false-negative rate, and relied on amniocentesis which had a risk of miscarriage.

Dr Kesby said some of his patients who were planning pregnancy took extreme measures to avoid contracting CMV during their pregnancy.

“They tried to find scenarios where they can get infected before they fall pregnant because they’re so scared about the whole thing.”

One thought on “Call to increase CMV awareness”