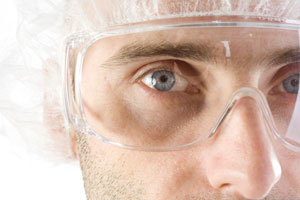 Hats on for simple infection prevention

AN Australian study showing that bloodstream infections from central venous lines can be slashed by more than half by adhering to simple sterile measures will change clinical practice in Australia, according to a leading intensivist. (1)

At the same time, a large medical defence organisation warned that doctors could be prosecuted if they deliberately breached aseptic techniques.

The research was well done, Australian, with a very large group and produced clear results, he said.

The study, published in this week’s MJA, involved a collaborative quality improvement project in which a checklist was used to record compliance with aseptic central venous line (CVL) insertion in 34 intensive care units (ICUs) in NSW over 18 months.

Maximal sterile precautions were divided into a “clinician bundle”, which included hand scrubbing and wearing sterile gloves and gown plus a theatre hat, mask and eyewear, and a “patient bundle”, which included fully draping the patient with a sterile sheet and checking the position of the CVL by imaging and/or pressure transducer.

Specifically, hat wearing was identified as the contentious component.

The authors estimated more than 15 000 CVLs were inserted in patients in ICUs each year in NSW alone.

Professor Cooper said he would support any calls for federal and state governments to fund an ongoing monitoring program to ensure all ICUs complied with the clinician and patient bundles.

“It [the study] is really good because it shows in an Australian setting that it is possible to significantly reduce CLAB or bloodstream infection rates by these incredibly simple things, which are basically having a checklist and trying to get people to comply”, he said. “And that hasn’t been shown before in Australia, so it is a new finding.”

Professor Cooper, who is also deputy director of intensive care at the Alfred Hospital in Melbourne, said washing hands and wearing a gown and gloves were accepted practice in Australian ICUs but donning a theatre hat and mask was more uncertain.

“The reason people don’t [wear a hat and mask] meticulously, I think, is that it hasn’t previously been so clear that it is important and probably partly because of some laziness at various levels,” he said.

Andrew Took, national manager of medicolegal advisory services at Avant, the largest medical indemnity insurer in Australia, said claims arising from alleged breaches of aseptic technique had been a problem for a long time.

“A claim could be brought by the patient for compensation and there is also a potential disciplinary prosecution of the practitioner if they have breached aseptic techniques deliberately”, he said.

Avant had assisted many members dealing with such claims and complaints, he said.

Professor Peter Collignon, professor of infectious diseases and microbiology at the Australian National University in Canberra, said the study “really showed, by not using rocket science, that basically having good sterile techniques [and] full draping, you can actually halve the number of people with bloodstream infections”.

“Ten per cent of people who get a bloodstream infection are likely to die as a result so this is an intervention we need to do”, Professor Collignon said.

“We need to make sure we find mechanisms of ensuring it actually happens and that means a team approach, some auditing, some supervision and checking that the appropriate approaches are being followed.”

5 thoughts on “Hats on for simple infection prevention”