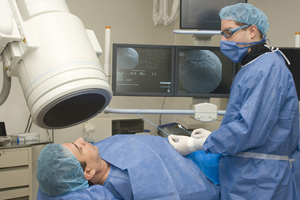 Pseudodisease: a risk of screening?

UNPROVEN screening tests increase medication use, health care costs and anxiety but produce little clinical benefit, according to experts commenting on research in the Archives of Internal Medicine.

Researchers compared the clinical course in 1000 asymptomatic patients who underwent coronary computed tomographic angiography (CCTA) screening, with that in 1000 similar patients who did not have the screening test. (1)

Over an 18-month follow up, patients with an abnormal CCTA result were more likely to use statins and aspirin and to undergo coronary revascularisation procedures than the controls. They were also more likely to be referred for secondary tests, despite their asymptomatic status and low Framingham Risk Score.

However, the rates of cardiovascular events were identical — and very low — in both groups.

“We found that evidence-free performance of CCTA in asymptomatic patients was associated with further evidence-free testing and interventions”, the researchers said.

Cardiac surgeon Professor James Tatoulis, who is chief medical advisor at the National Heart Foundation, said that his organisation does not recommend CCTA screening.

“Although people with high calcium scores on CCTA have a higher possibility of having cardiovascular disease, knowing this does not seem to alter their medium-term outcomes”, he said.

“It may seem intuitive to screen patients, and act on positive findings … but this is not necessarily borne out by the evidence”, he said.

An editorial in the Archives of Internal Medicine said the research was a “powerful reminder of the 2-edged effects of screening”. (2)

The editorial, titled “Pseudodisease, the next great epidemic in coronary atherosclerosis?”, emphasised that overdiagnosis led to increased tests, medications, or even surgical procedures, all of which carried risks.

“Over diagnosis is threatening to become an increasingly important public health problem because of the enthusiasm for and proliferation of unproven screening tests”, the editorial said.

Professor Janet Hiller, professor of public health at the Australian Catholic University, said there was a range of unproven screening tests available to the Australian public, sometimes marketed over the internet.

“I think we need to look at whether our regulatory approaches have kept up with the marketing”, she said.

Professor Hiller said non-evidence-based screening may cause harm beyond the immediate patient, because people who received a positive result often presented at their GP seeking follow-up tests.

“So the companies make the profit but it’s our public health system that has to wear the cost”, she said.

Professor Stephen Leeder, director of the Menzies Centre for Health Policy at the University of Sydney, said screening had been controversial for decades.

“Screening is notorious for turning people into patients,” he said.

“Unless you have unequivocal evidence of screening detecting a real precursor of clinical disease at a point where treatment is effective, and you can assure compliance with that treatment … you generate useless pain and worry and huge expense,” he said.

The Archives study authors and editorial called for randomised trials to further examine the benefits of heart disease screening.

“… we know that many people die with, rather than because of, [heart disease]. If we are going to prevent an epidemic of coronary pseudodisease, we as a profession will have to muster the courage, imagination, and discipline to design and perform the needed large-scale trials,” the editorial said.

9 thoughts on “Pseudodisease: a risk of screening?”