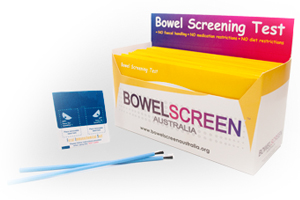 AUSTRALIA’S bowel cancer screening program has a new lease of life after being allocated $139 million in last week’s federal Budget, while a new study suggests that screening and follow-up should target healthier older adults.

The bowel screening program, which provides a one-off faecal occult blood test (FOBT) for adults turning 50, 55 and 65, has been reinstated after its funding ended last year.

The study authors said their results supported the use of life expectancy predictions to guide colorectal cancer screening decisions in older adults and argued against one-size-fits-all interventions “that simply aim to increase overall screening and follow-up rates”.

The study followed 212 American veterans aged 70 years or older with a positive FOBT for 7 years and found that those with the best life expectancy were less likely to experience a net burden from current screening and follow-up than those with worst life expectancy. Net burdens were defined to include false-positive FOBT results, people without follow-up colonoscopy and those who died within 5 years of their FOBT.

The authors said randomised trials of FOBT suggested a person should have a life expectancy of at least 5 years to derive survival benefit from screening.

However, Australian experts responding to the Budget recommended that Australia’s screening program should offer an FOBT to everyone aged over 50, every 2 years.

Associate Professor Graham Newstead, a Sydney-based colorectal surgeon and chair of the Bowel Cancer Foundation, welcomed the budget funding but said 2-yearly screening was needed, mainly because the FOBT missed polyps that were too small to bleed but which might develop into cancer.

“It’s a lot better than doing nothing, but it’s an inadequate program which means it’s a lousy way of tackling bowel cancer,” he said. “If you happen to be 66 — bad luck Freddy.”

Professor Graeme Young, a gastroenterologist and co-director of the Flinders Centre for Cancer Prevention and Control, also welcomed the government’s decision to continue the bowel cancer screening program, but said it needed to be extended to everyone aged 50–75.

Both Australian experts emphasised that screening was non-invasive and still had important benefits for older patients.

Professor Newstead, who is also chair of the International Council of Coloproctology, said he removed colorectal cancers from “plenty” of older patients.

“Their life expectancy may be less than mine, but that doesn’t mean you should leave them to the wolves,” Professor Newstead said.

Both experts called for a publicity campaign to raise awareness of the program and improve participation rates, which currently stand at about 40%. “If you’d never heard of the program and you received an envelope in the mail which said ‘put your poo in this and post it back to us’, you’d throw it in the bin,” Professor Newstead said.

Professor Young also said that colonoscopies needed to be linked into the screening pathway, rather than being left up to “usual care”.

“After all, the screening step is just the start — the essential piece in the pathway is ensuring that patients with a positive FOBT have a colonoscopy,” he said.

2 thoughts on “Will FOBT screening hit the right target?”