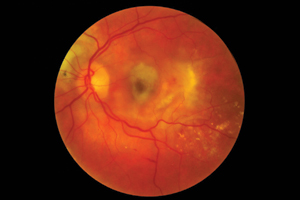 NEW research on age-related macular degeneration treatment will not create substantial change to the clinical management of the condition, despite the potential to save the government millions of dollars, according to leading ophthalmologists.

The Comparison of Age-Related Macular Degeneration Treatment Trials (CATT) found that bevacizumab (Avastin) is as effective as ranibizumab (Lucentis) in treating AMD, despite being about 40 times cheaper.

The first-year results of the 2-year trial, published in the New England Journal of Medicine, involved 1208 patients randomised to receive either drug on a monthly or “as needed” basis. The two drugs had equivalent effects on visual acuity when administered at the same schedule. (1)

Lucentis, costing $1976 per dose, is the only drug approved by the Therapeutic Goods Administration (TGA) to treat AMD. Avastin, a drug approved to treat cancer, costs about $50 a dose but does not have TGA approval for AMD.

Lucentis is listed on the Pharmaceutical Benefits Scheme (PBS), making it cheaper for patients with AMD. In 2010, the PBS spent $237 million on Lucentis.

An editorial in the MJA, published rapid online last Friday, explains that Australia’s regulatory framework makes it difficult to promote the cheaper drug, Avastin, for AMD. (2)

Associate Professor Alex Hunyor, a vitreoretinal specialist, told MJA InSight the CATT results were “eagerly anticipated” but he would continue to use Lucentis for his AMD patients.

Dr Hunyor said Lucentis still had a stronger evidence base and safety profile. “I would consider these results as encouraging preliminary data rather than the final word. The main concern though is related to safety.”

Serious adverse events (mainly hospitalisations) occurred in 24% of patients receiving Avastin, compared with 19% of patients receiving Lucentis. However, the researchers said the study was not sufficiently powered to determine if this was due to chance, imbalance in baseline health status or a true difference in risk.

Although the CATT study focused on AMD, in Australia the results may ironically have implications for patients using Avastin for other diseases that involve new blood vessel formation in the eye, such as diabetes or blocked veins. Because Lucentis is not PBS listed for these conditions, Avastin is the drug of choice.

Dr Wilson Heriot, a Melbourne-based retinal surgeon, said he would also continue to use Lucentis for AMD because it is on-label and funded, so the results were more relevant for his non-AMD patients using Avastin.

“The great thing about the CATT study in Australia is that we can now feel more confident that there’s good evidence that Avastin is effective and safe in preventing blindness in diseases that involve new vessel formation,” he said.

The two ophthalmologists acknowledged that the research raised the moral question of whether to continue to use Lucentis considering its financial cost to the community. However, Dr Hunyor said his primary responsibility as a clinician was to the presenting patient.

“I would personally be reluctant to say to my patients, ‘The best available evidence supports the use of this treatment which is funded, but are you interested in changing to an unapproved treatment for the sake of saving the community some money?’.”

Dr Hunyor said it was more appropriate for clinicians to raise concerns with the government rather than changing their clinical practice. Dr Hunyor and others from the Royal Australian and New Zealand College of Ophthalmologists will highlight the research results in a meeting with the federal Department of Health and Ageing this week.

Both ophthalmologists interviewed by MJA InSight declared that they are on the medical advisory board for Novartis, which manufactures Lucentis in Australia.