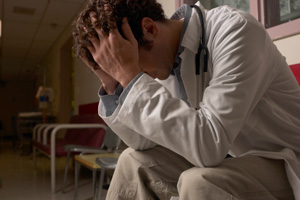 JUNIOR doctors and medical students believe they may be labelled as failures if they seek help for stress or mental illness, but the medical culture is gradually changing for the better, according to groups representing junior doctors.

Robert Marshall, president of the Australian Medical Students’ Association (AMSA), says one of the barriers to seeking help is the fact that the doctor a medical student could turn to for help was often the student’s assessor and future colleague.

“People don’t want to be tagged as someone who is not coping,” Mr Marshall said. “Medical school is generally collegiate, but there are a lot of A-type personalities who want to achieve, and want to be seen to be achieving.”

Dr Michael Bonning, chair of the AMA Council of Doctors in Training and a board member of beyondblue: the national depression initiative, agreed that some young doctors unfortunately believed that seeking help is an “admission of failure”.

Their comments come in response to an article in the MJA, which describes a support program for junior doctors at Royal Melbourne Hospital. The program, which was introduced after the suicide of a surgical registrar in 2006, aims to identify “at-risk” young doctors and refer them to appropriate specialists. (1)

The authors, from the Royal Melbourne Hospital, wrote that one of the key lessons they learned in implementing the program was that “junior staff are extremely reluctant to seek assistance for fear of harming future career prospects”.

The AMSA says there is a need for more education on student health and wellbeing in medical schools, and has released a guide that aims to provide practical advice on wellbeing. (2)

The guide was created in response to AMSA research that found 55% of medical students believed there was a stigma associated with experiencing stress or distress, and 72% perceived a stigma around mental health. (3)

The AMSA said there was a body of research which showed that although medical students exhibit similar psychological wellbeing to other students before medical school starts, this lowers during their studies.

Despite the challenges, Dr Bonning believes the stigma associated with seeking help is gradually reducing, especially as doctor wellbeing and work‒life balance has become a cause du jour for many medical organisations. “That makes it a bit more of an approachable issue for people,” he said.

Dr Bonning said that doctors who spoke out about their workload or stress issues encouraged others to do the same. “I’ve seen with my colleagues that it often takes one or two people to be a ‘lightning rod’ to encourage other people to talk about the pressures they’re facing,” he said.

He said the culture of medicine is also changing for the better, with more doctors of all ages seeking a work–life balance. He called for more research on the impact of reduced work hours, particularly on patient outcomes. “We are an evidenced-based profession so this should be based on evidence too, not just opinions,” he said.

beyondblue has also developed a specific Doctors’ Mental Health Program because research had identified high rates of mental illness within the medical profession. (4)