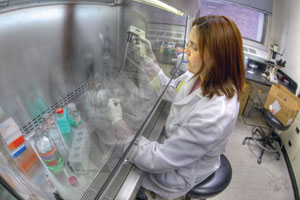 BREAST cancer is overrepresented in clinical trials relative to its disease burden in the community, while lung and colorectal cancers miss out on research, a study published in the latest Medical Journal of Australia has found. (1)

The study has sparked calls for Australia’s research funding to be more closely aligned with the actual cancer disease burden.

Using data extracted from clinical trial registries, the researchers examined the number of trials devoted to studying different types of cancer in Australia. This information was compared with the actual disease burden of each cancer, as measured by disability-adjusted life-years (DALYs).

The researchers identified 368 cancer trials that were recruiting patients in Australia at 31 March 2009. They found that almost 17% of the trials were devoted to studying breast cancer, yet breast cancer accounted for only 12.8% of the DALY disease burden for all cancers. The breast cancer trials also anticipated recruiting the largest number of patients, 74 247, equivalent to 38% of the total sample size for all 368 trials combined.

Cancers that had relatively few clinical trials included lung, colorectal, prostate and pancreatic cancers. Only 7% of trials were in lung cancer, which has the greatest burden of disease; and colorectal cancer, the second biggest disease burden, attracted less than 6% of research.

Professor Graeme Young, a gastroenterologist and co-director of the Flinders Centre for Cancer Prevention and Control, said the study confirmed his hunch that there is a disparity between research attention and disease burden.

“If cuts do occur then it’s even more crucial to get funds strategically directed to where the need is,” he said.

He said this would encourage researchers to study the underrepresented cancers. “In my view, researchers go to where they can get the money and not necessarily to where the problems are, and I think this paper proves that,” he said.

Professor Young attributed the disproportionate number of breast cancer trials largely to consumer support for breast cancer research. “The strongest cancer groups are clearly the breast cancer ones, and good luck to them,” he said.

“I don’t think you could say that breast cancer research is overrepresented, but breast cancer is doing better. There’s absolutely no apology for that,” she said.

Ms Carrick said support groups for other types of cancers could learn from breast cancer’s success. “It’s not about competing with other cancer groups, it’s about sharing our knowledge and strategies to increase research funding across the board,” she said.

The study found that, compared with other cancer types, breast cancer research was more likely to include women with early-stage disease and to be investigating non-drug treatments. Breast cancer trials were also less likely to be sponsored by the pharmaceutical industry.

Studies for any cancer type that were industry funded were more likely to investigate systemic therapies and to recruit patients with advanced disease.

The researchers also searched an international clinical trials registry and found a similar proportion of trials were recruiting for each cancer type as in Australia.