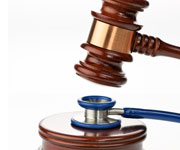 THE quality of medical information provided by expert witnesses in legal proceedings is often poor, and may be improved if immunity against prosecution for experts is removed, according to AMA president Dr Andrew Pesce.

Although Australia still provides immunity for expert witnesses, the British case could be used as a precedent if a similar case was brought here.

Dr Pesce said removing immunity might encourage experts to do a better job and therefore protect themselves from litigation. “I don’t think it would be a bad thing. It would make doctors focus on providing reports that were of good quality and that made arguments based on good evidence,” he said.

However, Professor Roy Beran, a neurologist and president of the Australasian College of Legal Medicine, described the UK case as  “very disturbing”.

Professor Beran said it might compromise the independence of advice from expert witnesses as they might feel compelled to satisfy clients’ expectations rather than meet their overarching responsibility to the court.

“What this decision seems to imply is that expert witnesses may be forced to act as ‘hired guns’ if they don’t want to be sued,” he said.

“The Supreme Court is the highest court in England so it’s quite influential … I would imagine that one day Australia would go down that path,” said Mr Madden, national practice group leader in medical law at law firm Slater & Gordon.

In the UK case, a car accident victim appealed against the expert evidence provided to the court by a clinical psychologist in a joint statement with another expert about the victim’s personal injury claim. The case progressed to the UK Supreme Court, where it was held that immunity against prosecution for expert witnesses involved in legal proceedings should be abolished.

However, the judges did not extend the immunity to defamation.

Mr Madden doubts that there would be a flood of litigation against medical expert witnesses if immunity was removed, because there are so many checks and balances in the system.

“There’s a lot of scrutiny of expert evidence in the courts, and there’s usually more than one expert. It would only happen in an extreme, unusual circumstance where the system falls apart — a rare case, but it may arise,” he said.

Professor Beran said he believed removing immunity would reduce the supply of expert witnesses. Mr Madden agreed this was “a possibility”.

Although Australian expert witnesses currently have legal immunity, there have been instances where medical boards have taken disciplinary action against doctors who have provided erroneous advice.

Dr Pesce said he had substantial experience reviewing expert witness reports, and had written medical advice for about 12 legal cases.

“Too often in my reviews of some experts’ reports I see things that are not backed up by evidence. Often the information is wrong, and not only is it wrong, but there’s no evidence to support it at all.

“It might be opinion but they’re presenting it as fact,” he said.