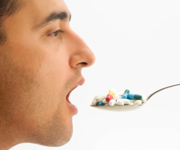 MOST people do not need multivitamins and should be warned they are flushing away their money, say Australian experts commenting on the latest study showing little evidence vitamin products do any good.

“Australians are probably second only to Americans in having expensive urine,” said Professor Colin Binns, professor of public health at Curtin University in Perth.

“I guess people want to take a pill to solve all of their ills rather than looking after their lifestyle ― diet, exercise, etcetera.”

Professor Ric Day, professor of clinical pharmacology at the University of New South Wales and St Vincent’s Hospital, Sydney, said toxicity had been described with excessive dosages of registered vitamin products and it was always important that patients not exceed recommended doses found on the labels.

“If individuals are well, eating a balanced diet, getting adequate sun exposure and not abusing alcohol, tobacco or other recreational drugs then they usually do not need vitamins,” he said.

An annual check with the GP was a good screen for an individual’s health and diagnosis of any vitamin deficiencies. Patients with chronic illness might need vitamin supplementation.

“Being on the look out for vitamin C, B group and D deficiency in the elderly is important,” Professor Day said. “(They are) much more prone to deficiency.”

The latest study on multivitamin use, reported in the American Journal of Epidemiology, found no clear decrease or increase in mortality from all causes, cardiovascular disease, or cancer and in morbidity from overall or major cancers among multivitamin supplement users. (1)

The findings did not vary across subgroups by ethnicity, age, body mass index, pre-existing illness, single vitamin/mineral supplement use, hormone replacement therapy use, and smoking status.

There was also no evidence indicating that multivitamin use was associated with risk of cancer, overall or at major sites, such as lung, colorectum, prostate and breast.

Professor Ian Caterson, professor of human nutrition at the University of Sydney, said, in general, healthy adults and children in Australia did not need vitamins and, in some cases,  vitamins could do harm.

There were some situations when supplements could be given, such as folate for pregnant women, and in cases of specific deficiency situations, but these were rare in Australia, he said.

Professor Binns said the problem with most nutrition effects was that there was a U-shaped curve. “If we are deficient in vitamin A then it has severe effects (but) too much vitamin A is dangerous too,” he said.

National Health and Medical Research Council guidelines recommended calcium for women, vitamin D for people aged over 65, folate, iodine and usually iron for pregnancy, and iodine for breastfeeding, he said.

Professor Alastair MacLennan, of the University of Adelaide and head of a research group in South Australia that has monitored the use of complementary and alternative medicines (CAMs) for almost two decades, said their surveys showed that 60% of women and 44% of men used CAMs, with women using significantly more vitamins and other products that were not prescribed than men.

Professor MacLennan said vitamins should be prescribed only to the very few Australians who were shown to be vitamin deficient by validated tests.

“The reasons for their use are mostly due to the marketing of these products and a wish to self-medicate,” he said.

“In Australia, the public spends four times as much on CAMs as their contribution to all registered pharmaceuticals, some of which are subsidised,” Professor MacLennan said. (2)

The experts agreed that clever and forceful marketing was largely responsible for the exponential increase in the use of vitamins that were not prescribed.

In a recent article in the Brisbane Times, the founder of an American charity that provides vitamins for children in the developing world said they were an “essential” part of every modern diet. (3)

Professor Binns said several studies supported the findings of the latest study, including a Cochrane review in 2008 of 67 randomised controlled trials that found no evidence to support antioxidant supplements — beta-carotene, vitamin A, vitamin C, vitamin E, and selenium ― to prevent mortality in healthy people or patients with various diseases. (4)

“Antioxidant supplements need to be considered medicinal products and should undergo sufficient evaluation before marketing,” the authors said.