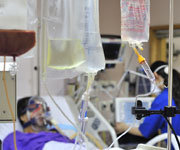 “QUARANTINING” intensive care beds for elective surgery patients and better work conditions for ICU nurses are on a wish list of solutions proposed by senior Australian experts to the ongoing problem of elective surgery cancellations.

Their suggestions follow results of an Australian study published in the MJA, showing that patients — particularly elective surgery patients — admitted to ICU after hours have a 10% increased risk of death compared to those admitted during hours. (1)

“You’re a bit like an athlete at the starting block and then you have 20 false starts… and by the time you get the patient to the operating room, you are physically exhausted,” he said.

“The prevention of predictable starting times leads to fatigue and fatigue leads to error. And if a complex patient returns to the intensive care ward after hours, then you don’t have the daytime staff there with the level of experience, or the infrastructure, to support them if there are problems.”

Dr Truskett said solutions would include quarantining ICU beds for elective surgery cases and also freeing up ICU beds by moving patients waiting for a ward bed to a recovery ward in the interim.

Professor Steve Webb, senior staff specialist in intensive care medicine at Royal Perth Hospital, said insufficient ICU beds on a per capita basis were the major cause of cancellation of elective surgical cases.

“In many places this is not a simple resource issue but, rather, reflects a shortage of ICU nurses whose conditions of work are not sufficiently attractive to retain them within the hospital system,” he said.

“Exit block”, where patients in the ICU were well enough to be discharged to the ward but there were no beds available, was also a contributing factor in some hospitals.

However, most ICUs that had tried reserving dedicated beds for elective surgical patients had found it did not work, Professor Webb said. “Faced with a critically ill patient and the only available bed is one reserved for tomorrow’s surgical elective admissions, it is natural that the bed is provided to the patient who needs it most urgently,” he said.

Balancing theatre lists throughout the week to even out the requirement for post-operative beds might help a little, he said.

Dr Deepak Bhonagiri, an intensivist at Liverpool Hospital, Sydney, and lead author of the MJA article, said reduced staffing levels in hospitals after hours could be one of the contributing factors to problems experienced in the ICU.

Hospitals were still built around the 9–5 principle so there were aspects of hospital staffing that significantly changed after hours, Dr Bhonagiri said.

“Do you fixate on the intensive care staffing or [is it related to] the fact that there are no [staff in pathology] after hours so… a blood test that you send off takes longer to come back?”

Dr Bhonagiri said the study did not investigate causation but the findings suggested hospital medical staff should be aware that special care may need to be taken with elective surgery patients admitted after hours.

“People might think if they are doing elective surgery and it is getting too late, should they think about doing it during [normal] hours,” he said. “The surgeon [who starts] operating from eight o’clock who is going to start a new patient at three o’clock — who is quite complex and requiring intensive care — might suddenly think that maybe he should postpone it for when he is fresh.

“You can’t expect surgeons to operate for 12 hours continuously.”

Professor Webb said the outcome for elective admissions was generally better than patients admitted as an emergency and so it was surprising to see this group driving an effect on mortality.

“It may be that the involvement of more experienced clinicians, both in the ICU and prior to ICU admission, may improve outcome,” he said.

Professor Webb and Dr Bhonagiri both said Australia was one of the safest places in the world to have surgery either during or after hours because the mortality rates were very low.