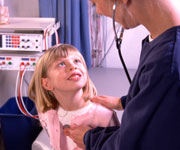 Call for a federal chief paediatrician

A LEADING Australian paediatrician has called for the appointment of a federal chief paediatrician to advise the government on strategies needed to meet the first national standards on the health care needs of children and adolescents, released this week.

He has also called on medical practices and hospitals to implement the improvements needed to meet the standards.

“Despite the fact that we are an affluent nation, seemingly able to largely outsmart the global recession, there is no doubt that the money available in the heath care system remains way below what is needed,” he said.

“Children don’t vote and so perhaps their needs do not reach the same priority when largely political decisions are made about the priorities for health care funding.”

Consensus standards for the care of children and adolescents in Australian health services were published in the MJA this week. (1)

They state that in a health care setting children and adolescents must be accommodated separately to adults, facilities must be provided for parents and carers to stay near their child, child- and adolescent-specific equipment and education are essential, and appropriately trained staff should be available.

The standards, aimed at all health services, were developed by a multidisciplinary working group of clinicians, health service providers and consumer advocates, convened by the RACP, and underwent pilot testing in six metropolitan, rural and regional hospitals.

Professor Fitzgerald, who had no direct input into the standards, said medical practices and hospitals must make funds available to meet the standards.

Dr Paul Bauert, chair of the AMA Child and Youth Health Committee, welcomed the standards and also agreed that a federal chief paediatrician was needed in Australia.

However, he said while bigger general practices attempted to set aside play areas for children, he believed the main thrust for improvements should be on general hospitals to implement the standards.

Professor Susan Sawyer, a member of the RACP Joint Adolescent Health Committee and the working party that developed the standards, said the standards were critical in ensuring that the health and welfare of children were fully protected in the medical setting.

Standards should not simply be “add-ons” but should underpin wider practices, Professor Sawyer said.

“Children and young people should not be viewed as second-class citizens in terms of their health,” she said.

“For the Australian health community to suggest it couldn’t afford such standards would be a sorry state of affairs.”

The closure of a number of paediatric wards, especially in country hospitals, had resulted in the dilution of expertise in paediatric nursing in particular but it also risked children being exposed to potential harms from much older patients, Professor Sawyer said.

Another problem was that most paediatric services struggled to provide age-appropriate pain management.

“We are increasingly aware of the risk of children and adolescents developing post-traumatic stress disorder as a result of painful procedures they were exposed to in hospitals,” she said.

“The notion of ‘just grin and bear it’ is simply not appropriate for children.”

Professor Fitzgerald said a lack of resources in hospitals meant that nurse-to-paediatric-patient staff ratios were inappropriate, there were insufficient beds to meet the needs for semi-elective surgery, and insufficient resources in overcrowded emergency departments where the waiting time could be 4‒5 hours.

“There is a huge unmet need for community allied health resources, which are necessary to supplement and complete the care of children following hospitalisation, and there is a frightening gap between the level of specialist and sub-specialist care for paediatric patients in regional and urban Australia, whether this be in mental health, substance abuse, surgery or medical specialties,” Professor Fitzgerald said

4 thoughts on “Call for a federal chief paediatrician”