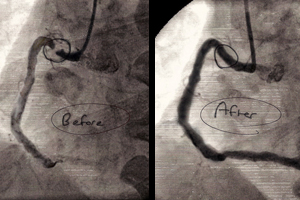 UP TO one-third of coronary stents inserted in patients with stable coronary artery disease (CAD) in Australia each year ― about 3500 stents —  may be unnecessary, potentially harmful and costing the nation millions of dollars, according to a leading cardiologist.

Professor Richard Harper, emeritus director of cardiology at MonashHeart, Monash Medical Centre in Melbourne, said any experienced interventional cardiologist would admit that many coronary lesions with 50‒70% stenosis were being stented in Australia without certain knowledge that the particular lesion was causing ischaemia.

These payments do not include the cost of a coronary angiography, radiological services and preparation, or aftercare.

The average cost of coronary angiography with stent insertion, including hospital stay, is $18 300 of which Medicare pays $1647.

Professor Harper said about 50% or more of stents were inserted in stable CAD patients and the remainder were in patients with acute heart attack, for which stenting was almost always warranted.

A rapid online publication of a detailed paper written by Professor Harper on the use of stents in CAD patients has been published by the MJA.

He was commenting after the issue of unnecessary stenting hit the headlines in the United States, with the revelation that Baltimore cardiologist Dr Mark Midei may have implanted 585 stents that were medically unnecessary from 2007 to 2009.

An article in theheart.org, the website for cardiovascular health professionals, said a US Senate Finance Committee report called the Midei imbroglio “a clear example of potential fraud, waste, and abuse”.(1)

The Finance Committee reportedly found that Abbott Laboratories, which manufactures stents, had long been in the practice of rewarding Dr Midei financially for being a high-volume user of its stents.

However, many US cardiologists believe Dr Midei is being treated unfairly.

The Cardiac Society of Australia and New Zealand (CSANZ)’s Interventional Council chair, Associate Professor Andrew MacIsaac, said any fraud or criminal behaviour by a cardiologist, as was being alleged in the US, was appalling and would be totally unacceptable.

However, he had never heard of it occurring in Australia and it was different from doctors having a diversity of opinion over the appropriate indications for coronary stenting.

“Stenting in stable angina is open to debate in some circumstances as to whether it reduces mortality but every study done shows it is effective in relieving symptoms,” he said.

Professor Harper said the problem with what he considers to be unnecessary stents in Australia “lies in our system of reimbursement for coronary procedures”.

He said patients often had more than one coronary lesion and the only sure way to tell which one was the cause of the myocardial ischaemia was by measuring fractional flow reserve (FFR) — or the effect of the narrowing on blood flow — during coronary angiography.

However, FFR was not commonly undertaken in Australia because the flow wire was costly and not adequately reimbursed in either the public or private system.

The procedure was also fiddly, took time and resulted in fewer stent insertions — a procedure which attracted a much higher fee.

“Faced with a 50-70% coronary stenosis, it is easier and more remunerative for an interventional cardiologist to stent the lesion rather than measure FFR — particularly when there is a two-thirds likelihood that the result will show no need for the stent,” Professor Harper said.

Professor Harper said the health system should be restructured to make it more financially viable to measure FFR.

He said a pivotal randomised study in the New England Journal of Medicine last year, of 1000 patients with multi-vessel coronary artery disease, showed that routine measurement of FFR in patients undergoing percutaneous coronary intervention with drug-eluting stents significantly reduced the rate of death, non-fatal myocardial infarction and repeat revascularisation compared with patients who had stents inserted on the basis of angiography alone.(2)

The patients who underwent FFR had fewer stents implanted at a lower cost.

The results were replicated in a follow-up study at two years, which was reported in the Journal of the American College of Cardiology.(3)

Professor MacIsaac said CSANZ had been lobbying for more than 10 years for the establishment of a national registry of coronary interventions to audit outcomes and quality assurance.

However, it was still waiting for federal and state funding.

“A database has essentially been prepared but there is no funding mechanism to implement the collection or analysis of the data,” he said.

“If we really want to be assured that everything is fine, that would be the way to go.”

A Medicare spokeswoman said the unnecessary insertion of cardiac stents had not been identified as a specific compliance issue.

“However, health professionals should be aware that when Medicare Australia has a concern that items are being claimed without meeting the item requirements, an audit may be conducted,” she said.

Medicare Australia treated all allegations of non-compliance seriously and encouraged anyone who suspected potential fraud or non-compliance under the Medicare program to call the Australian Government Services Fraud Tip-off Line on 131 524.