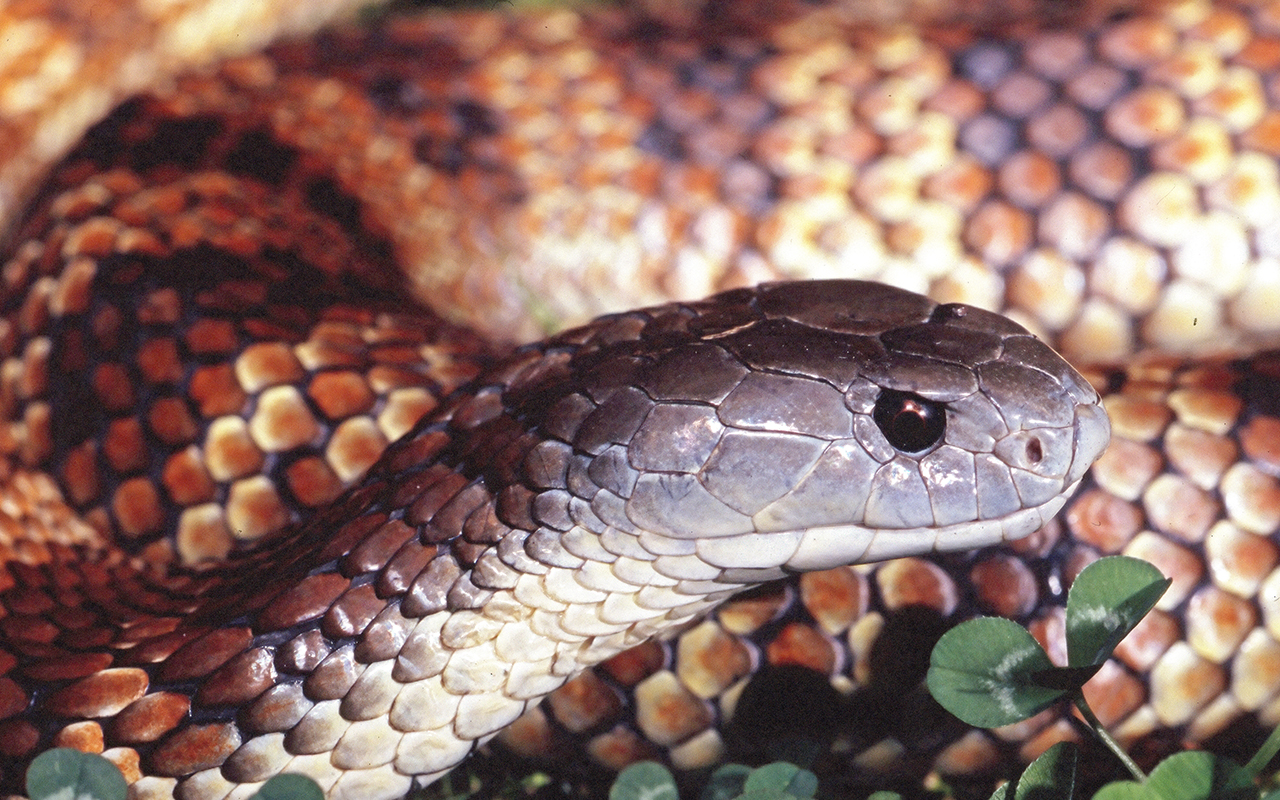 TWO recent deaths by tiger snake bites have caused some experts to question recommendations that one vial of any Australian snake antivenom is all that is required for treatment of an Australian snake’s bite.

Associate Professors Scott Weinstein and Julian White from the Women’s and Children’s Hospital in Adelaide, and Mr Peter Mirtschin from Venom Science, wrote in the MJA that “the Australian medical community should be aware that there is no consensus agreement that one vial of any Australian snake antivenom is all that is ever required for significant Australian elapid envenoming”.

A 70-year-old woman who was bitten multiple times by a tiger snake died less than 24 hours after being bitten. About 2–3 hours after the bite, she received two vials of tiger snake antivenom but further deteriorated and was given an additional vial 6.5 hours later, to no avail. An autopsy revealed massive bleeding and a detected tiger snake venom level of 697 ng/mL.

A 27-year-old man who received a prolonged bite from a 1.5 m tiger snake that had to be forcibly removed, received one vial of tiger snake antivenom about 1 hour after the bite. A vial of brown snake antivenom was provided early the next morning, but the patient died shortly thereafter.

The coroner’s conclusions included reiteration of a consulted clinical toxinologist’s comments that “in treating an envenomed patient we need to successfully treat the ‘outlier’ case, not the ‘median’ case”, and the coroner stated that “in light of [the patient’s] death, the current recommendation to administer one ampoule of antivenom needs refinement”.

Weinstein and colleagues cited the Australian Snakebite Project’s 2017 study (also published in the MJA) as having “concluded that one vial of antivenom was sufficient to effectively treat envenoming by all taxa of Australian elapids”.

“Inadequately treating patients with particularly high venom loads exposes them to unnecessary risk and decreases the likelihood of a positive outcome,” Weinstein and colleagues wrote.

“For example, for an envenomed patient with pre-existing medical comorbidities or older people or young children who are envenomed by a large amount of injected venom, the single vial recommendation may be a ‘precariously narrow therapeutic strategy’.

“The severity of envenoming is also unpredictable because of the marked variability of injected venom volume and individual venom sample properties that can be influenced by geographic origin, ontogeny, as well as individual genetic factors.”

There was no evidence that higher doses of antivenom were dangerous, they wrote.

“We do not suggest that multiple vial doses should routinely be used for all Australian snakebite patients requiring antivenom, but the patient-centred factors and biomedical reasons outlined [in our article] support our contention that recommendations for a uniform single vial treatment are inappropriate.

“Each envenomed patient should be individually assessed and provided with adequate antivenom in response to the envenoming severity and their individual clinical needs,” they concluded.

A world-first Australian study funded by the Heart Foundation is using brain imaging to understand how exercise can repair brain function after a stroke. While it is already known that exercise can help stroke survivors recover brain function after a stroke, this is the first time that magnetic resonance imaging (MRI) has been used to precisely track the level of neuron regeneration following exercise programs. Researchers from the Florey Institute of Neuroscience and Mental Health were able to measure the regrowth in total brain volume and hippocampal volume of stroke survivors who took part in two 8-week exercise programs. They are using the scans, combined with memory tests, to identify how effective exercise is regenerating brain tissue after an ischaemic stroke, which is the most common form of stroke in Australia. The Post Ischaemic Stroke Cardiovascular Exercise Study (PISCES) pilot study followed 35 stroke survivors. They were divided into groups that did aerobic, strength and resistance exercises. Two months after their stroke they did one hour of exercise, three times a week for 8 weeks and had an MRI scan. The MRI scan was repeated 12 months after their stroke. The PISCES researchers focused on the growth of the hippocampus, which governs memory, emotional responses, spatial processing, and navigation. On the side of the brain damaged by the stroke, they found there was a 2.9% increased growth in hippocampal volume compared with a group of stroke survivors in another observational study. The researchers stressed that these were early but encouraging results that would be further tested in larger studies.

Findings from the Garvan Institute of Medical Research show modern humans acquired a gene variant from Denisovans – an extinct human species related to Neanderthals – that heightened their immune reactions, indicating adaptation of the immune system to a changing environment. The breakthrough study, published in Nature Immunology, is the first to demonstrate a single DNA sequence variant from an extinct human species that changes the activity of the modern human immune system. The Denisovans interbred with modern humans around 50 000 years ago during the migrations of modern humans from Africa to what is now Papua New Guinea and Australia. Today, up to 5% of the genome of people indigenous to Papua New Guinea is derived from Denisovans. The Garvan study reveals that modern humans acquired a gene variant from Denisovans that increases a range of immune reactions and inflammatory responses, including reactions that protect humans from disease-causing microbes. Harmful versions of a human gene called TNFAIP3 have long been associated with the overactive immunity in autoimmune conditions, including inflammatory bowel diseases, arthritis, multiple sclerosis, lupus, psoriasis and type 1 diabetes. The TNFAIP3 gene codes for a protein called A20 that helps “cool” the immune system by reducing immune reactions to foreign molecules and microbes. As part of a collaboration between the Garvan Institute; the Sydney Children’s Hospital, Randwick; the Children’s Hospital at Westmead; and the Clinical Immunogenomics Research Consortium Australia (CIRCA), the researchers analysed the genomes of families in which one child presented with a severe and unusual autoimmune or inflammatory condition. Four separate families were found to have the same DNA variant in the TNFAIP3 gene, changing one amino acid in the A20 protein from an isoleucine to a leucine (I207L). The I207L variant carried by the Sydney families was absent from most populations but common in indigenous populations east of the Wallace Line, a deep ocean trench passing between Bali and Lombok and separating Asian fauna to the west from Australian fauna to the east. The I207L variant was common in people throughout Oceania, including people with Indigenous Australian, Melanesian, Māori and Polynesian ancestry. The team also discovered the I207L variant in the genome sequence of an extinct human species, extracted from a 50 000-year-old finger bone of a Denisovan girl, found inside the Denisova cave in the Altai Mountains of Siberia. The I207L variant was present in two copies in the Denisovan girl but absent from Neanderthal remains from the same cave, indicating that the immunity-enhancing gene variant arose after the divergence of the Denisovan and Neanderthal lineages around 400 000 years ago.

Babies born by caesarean delivery tend to have altered gut microbiota and are more prone to colonisation by bacteria that potentially cause disease, according to a report published in Nature. In the largest known study of its kind, the results confirm previous findings suggesting that the mode of delivery is a major factor that shapes the gut microbiota in the first few weeks of life. Newborn babies acquire microorganisms from their mothers and surrounding environment that seed their gut microbiota; disruption of this process has been associated with the development of some diseases in childhood or later in life. Previous attempts to understand what influences the composition of the gut microbiota in babies during the neonatal period have been limited by small sample sizes and poor resolution of the microbiota. Researchers from Monash University and the UK’s Wellcome Sanger Institute performed whole-genome sequencing of the human gut microbiota in 596 full-term babies born in UK hospitals to determine how birth by caesarean delivery shapes the composition of the microbiota during the neonatal period. Of the babies studied, there were 314 vaginal births and 282 births via caesarean delivery. The analyses revealed that birth by caesarean delivery was associated with disrupted transmission of maternal commensal bacteria and a higher incidence of colonisation with drug-resistant opportunistic pathogens, which are likely to be of environmental origin. Around 83% of babies born by caesarean maternal commensal bacteria were found to carry potentially pathogenic bacteria, compared with around 49% of the vaginally delivered babies. Maternal antibiotic use accounted for the greatest amount of variation in the composition of gut microbiota in vaginally delivered babies. The clinical consequences of disruptions to gut microbiota and presence of pathogens in early life remain to be determined, the authors concluded.