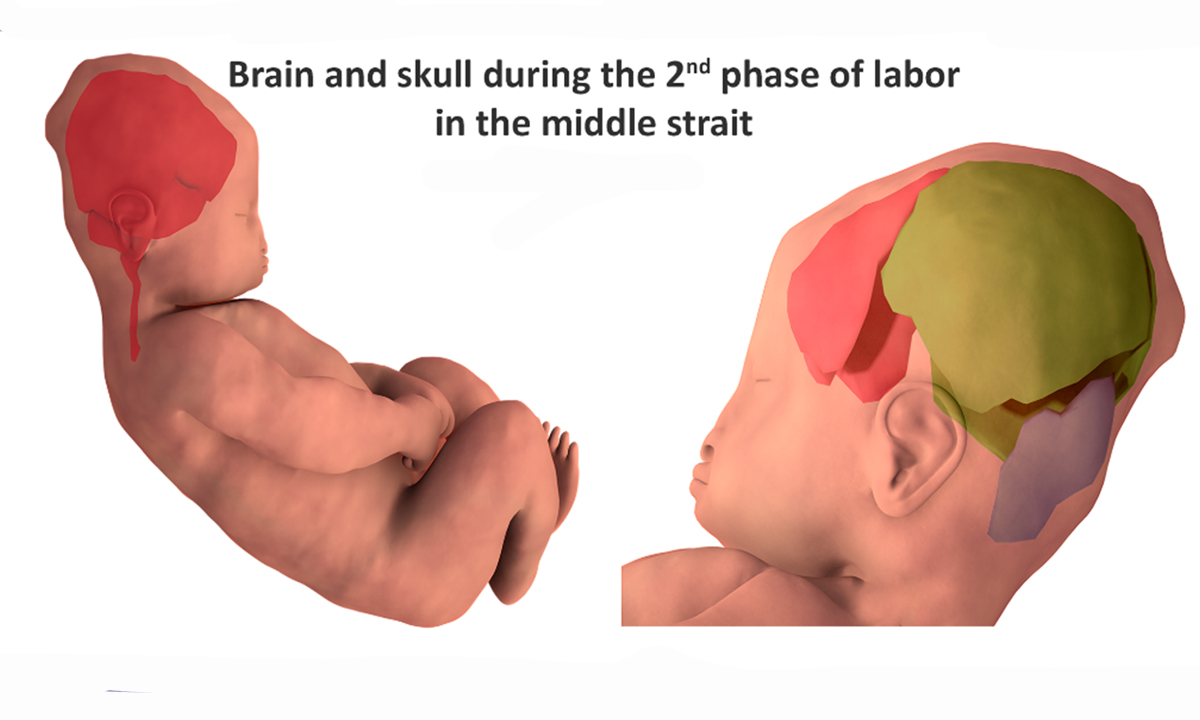 Using magnetic resonance imaging (MRI), French researchers have captured 3D images that show how infants’ brains and skulls change shape as they move through the birth canal just before delivery. The images were published in PLOS ONE. Doctors have long known that infants’ heads change shape during birth. Termed “fetal head molding,” these changes occur during the second stage of labor, when the baby leaves the uterus and moves through the birth canal. However, the details of fetal head molding remain unclear, and only one prior study has captured images of this process. In the new study, researchers used 3D MRI to capture detailed images of seven infants’ skulls and brains before and during the second stage of labor. The analysis revealed fetal head molding during the second stage of labor in all seven infants, with different parts of the skull overlapping to varying degrees among the infants. After birth, five of the newborns’ skull and brain shapes returned to their pre-birth state, but the changes persisted in two of the infants. Two of the three infants with the greatest degree of fetal head molding were delivered by emergency caesarean section, but the third was delivered vaginally with minimal expulsive efforts. Overall, the findings suggest that infants experience greater skull stresses during birth than previously thought, potentially underlying the asymptomatic brain and retinal bleeding seen in many newborns after vaginal delivery. The authors noted that a larger study was needed to confirm their findings, but that their work demonstrates the value of 3D MRI in capturing fetal head molding.

Patients with melanoma lack the confidence to check their own skin

People who have had a melanoma removed know the importance of skin self-checks, but many don’t feel confident doing it, according to research from the University of Sydney and the Melanoma Institute Australia, published in JAMA Dermatology. Qualitative interviews were conducted with 37 patients with melanoma who were previously treated for a first primary localised melanoma during 2014 and had not had a recurrence or new primary melanoma in the time since treatment. Their answers revealed that while most people perceived self-skin examination (SSE) as important, they did not report undertaking full body SSE on a regular basis. Reasons for this included that many people did not consider themselves to be good at it, instead preferring the experts to conduct all skin examinations, and relying on scheduled clinic visits as the main way to detect melanoma. Many of the patients with melanoma were also willing to consider using digital technologies, such as smartphone apps, to assist them with skin checks. “Efforts to test the effectiveness and safety of these new technologies in improving skin self-examination practices and promoting patient-led surveillance are warranted,” the authors concluded.

A potential new treatment for asthma that works by targeting the cause of the disease, rather than just masking its symptoms, has been revealed in research from the Walter and Eliza Hall Institute of Medical Research, published in the Journal of Clinical Investigation Insight. “Our early research identified that the enzyme Ezh2, which is an essential component of the epigenome, was critical to the immune system’s ability to drive inflammation in response to allergens,” the researchers said. “This indicated that an Ezh2 inhibitor drug could effectively suppress inflammation in an allergic response.” Through a series of laboratory studies, the researchers showed that the inhibition of Ezh2 could dampen the overreaction by immune T cells that lead to uncontrolled inflammation in the lungs, as well as reverse any established inflammation associated with asthma. Current asthma medicines such as airway relieving inhalers only serve to ease the symptoms of chest tightness, shortness of breath and coughing, while anti-inflammatory steroids are associated with many side effects and recent developments in targeted injectable therapies are very expensive. Furthermore, none of these medicines cure the disease, so new and improved options are urgently needed. The researchers said the team’s findings could dramatically improve the future of asthma treatment.

Consensus statement: Hepatitis B management during immunosuppression for haematological and solid organ malignancies: an Australian consensus statement
Doyle et al: doi: 10.5694/mja2.50160
Testing for hepatitis B in all patients with haematological and solid tumour malignancies, and prophylactic treatment in for people with chronic HBV infection or past exposure to HBV, is recommended to avoid HBV reactivation during cancer therapy … PREMIUM CONTENT

Doctors should play a bigger role in the governance of LHDs