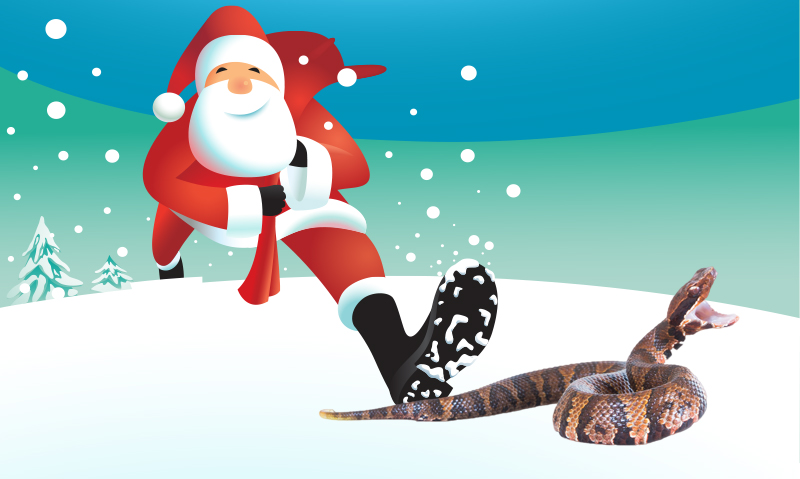 THE December edition of the MJA will do little to alleviate the fears of visitors to our fair nation, packed as it is with tales of snakebite, cane toad poisoning and sport-induced cardiac arrhythmias.

Americans on social networking site Reddit were recently asked to draw a map of Australia and pinpoint our many tourist attractions. The results proved that our reputation for dangerous animals has spread far and wide. (1)

Three case reports in the MJA highlight some of the dangers that we Aussies face and overcome every day.

As a nation of sports spectators we should take heed of the case of a 40-year-old Queenslander who had a spectacular sinus tachycardia while watching the deciding game of the 2012 State of Origin rugby league series on television. (2)

The man, on continuous telemetry for decompensated idiopathic dilated cardiomyopathy following explantation of an infected implantable cardiodefibrillator, began experiencing tachycardia when the television coverage of the game started at 7 pm and followed by a second peak at kick-off around 8.15 pm.

“The sinus tachycardia persisted throughout the first half until the halftime interlude, when normocardia resumed”, the authors wrote. “The tachycardia reoccurred at the start of the second half, reaching a peak in the dying minutes of the game, when the patient’s home state, Queensland, scored a field goal at 75 minutes — followed by a missed long-range field goal by the NSW halfback in the final minute of the game — securing victory by one point for Queensland (21:55).”

With the cricket season now in full swing in Australia, perhaps doctors should be on the lookout for extended periods of tachycardia, in keeping with longer game times.

The second case report details the adventures of herpetologist Steve Wilson, one of the case’s coauthors who, in October 1979, found the first live specimen of the rare Lake Cronin snake (Paroplocephalus atriceps), photographed it and was promptly bitten by it. (3)

He initially ignored the bite and went on with his photography, attending hospital about 40 minutes later after becoming unwell. He developed venom-induced consumption coagulopathy but no neurotoxicity or myotoxicity, was treated with one vial of polyvalent antivenom and made a full recovery.

Thirty-four years is a long lead-time to a case report but it took an extended period to settle on a name and classification for this snake. The case is the only known envenoming, and the authors said that it was “important to document the clinical and laboratory effects of another highly venomous snake that was previously unknown to the medical community in Australia, even if the probability of bites occurring in the wild is very low”.

If you are feeling a little rusty on treating snakebite, this edition of the MJA also contains a review of snakebite diagnosis and treatment guidelines following the Australian Snakebite Project. It includes recommendations about monovalent versus polyvalent antivenom administration, the number of doses of antivenom required, the whole blood clotting test in the Australian context and the use of fresh frozen plasma for the restoration of clotting function. (4)

An accompanying editorial said the new guidelines “reflect a major change in the way we should manage snakebite and will hopefully lead to standardisation of care around Australia”. (5)

The third case report involved a fit and healthy woman in her mid 30s who set off on a solo bushwalk through the Northern Territory with plans to live on “bush tucker” and any wildlife that crossed her path. (6)

After an arduous few days she made the mistake of cooking and eating a cane toad that hopped into her tent.

She “immediately developed nausea and vomiting and became acutely aware of the distance to medical care and her serious predicament”, the authors wrote.

She walked 100 km over 4 days to a campsite with a public telephone, where she called an ambulance.

Diaphoretic, nauseated, anxious, sunburnt, and with an initial blood gas examination showing severe metabolic acidosis with respiratory compensation, the woman was given “2 L of intravenous normal saline and a sandwich”.

She was admitted, given breakfast, lunch and dinner, her pH normalised after 8 hours and she was discharged the following day.

The authors advised that it was a good idea to “exercise caution in eating bush tucker as there are many highly toxic plants and animals in Australia, and the popular pictorial bush tucker guides are no alternative to the deep understanding and knowledge that allows traditional Indigenous peoples to live safely off the country”.

Fair dinkum, this edition of the MJA is a reminder to Australian doctors that they need to be prepared for unexpected dangers.