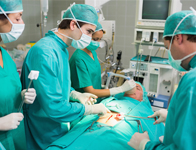 AUSTRALIAN teaching hospitals are lagging behind the demand for part-time surgical trainee positions and it may be hurting the profession, says a leading expert in the field.

Associate Professor Susan Neuhaus, from Royal Adelaide Hospital and the University of Adelaide’s Department of Surgery, was responding to research published in the latest MJA, which demonstrated a “striking mismatch” between demand for flexible surgical training and number of trainees actually in part-time training. (1)

The authors surveyed 659 Royal Australasian College of Surgeons (RACS) trainees in 2010 and found 31.6% (n = 208) expressed an interest in part-time training, yet only 0.3% (2 trainees) were actually doing part-time training. Of those interested, 54.3% were women.

“These results show a previously undocumented high level of interest in flexible training among both male and female trainees”, the authors wrote.

“Although only around 8% of qualified Australasian surgeons are women, we found that 28% of RACS trainees are women, indicating that a workforce transition is occurring. As we also found that more women than men are interested in flexible training these demographic trends are likely to increase pressure for part-time training opportunities.”

Professor Neuhaus said the “feminisation of the workforce” was not the only factor at work.

“We’re not just talking about encouraging women into surgery. It’s about flexible working conditions for everyone”, she told MJA InSight.

After comparing logbook data and fellowship examination pass rates for full-time and part-time trainees, she and her coauthors concluded that “positions can be developed that meet both the regulatory needs of the College and also the needs of the trainees and the units they work on”.

“We demonstrated that flexible training for surgeons can be done”, Professor Neuhaus told MJA InSight. “This paper [in the MJA] demonstrates that there is a need for it to be done.

“There are two nexus issues here. First we need to break this myth about hours in surgery equalling competence”, she said. “There’s this belief that if you’re not working 100 hours a week, you’re not a good surgeon. It’s just not the case.

“Second, diversity makes for a much better, stronger profession.

“It’s fascinating to me that the Australian Defence Force prides itself on having 12% of its workforce being female. The RACS is apparently content with 8% to 10% of surgeons being women.

“That is not diversity, and it’s not reflective of the society we live in”, Professor Neuhaus said.

Dr Will Milford, chair of the AMA Council of Doctors-in-Training, said that although the council supported the move to more flexible training, the concept was not easy to put into practice.

“The demand for flexible training is high, but the uptake is low, and part of the reason for that is that sometimes the concept is a little different from reality”, Dr Milford told MJA InSight.

“There are issues with remuneration and prolongation of training and those things may give people second thoughts.

“Colleges can only do so much — yes, they can offer accreditation but the hospitals have to be willing to employ part-time surgical trainees, and there’s a reluctance to do that, particularly with stand-alone positions.

“When it comes to the crunch, there’s a lot of concentration on the colleges to provide flexible training but that’s only half the equation. The employers need to embrace the concept as well. If they are not willing then it’s not going to happen.”

In a commentary on the research in the MJA, Dr Simon Williams, Censor-in-Chief for the RACS, wrote that there was no doubt that “some doctors are put off pursuing surgical training because it is not seen as compatible with raising a family or having an appropriate work-life balance”, a situation that “contributes to the imbalance between the sexes in surgery”. (3)

“More needs to be done to ensure surgery is not limiting its pool of available candidates”, Dr Williams wrote. “However, until there are a proportion of flexible options for training available, these issues and concerns cannot be fully substantiated or explored.”

Dr Jill Tomlinson, deputy chair of the RACS’s Women in Surgery section, wrote in a recent issue of Surgical News: “This year may not be the year that we achieve access to flexible surgical training for all Trainees who desire it, but if it’s the ‘Year of Flexible Surgical Training Conversations’, that will be a great start.” (4)