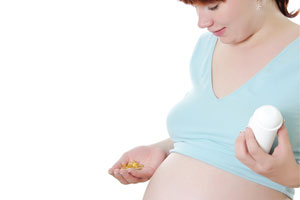 Professor Peter Ebeling, chair of the University of Melbourne’s Northwest Academic Centre and endocrinologist, told MJA InSight the latest research was at odds with a 2006 study published in The Lancet, which had found an interaction between low vitamin D levels in pregnancy and bone mineral content at the age of about 9 years. (2)

Professor Ebeling said the new study was the largest to date and had been carefully conducted.

The UK researchers compared recorded measurements of the mothers’ 25-hydroxyvitamin D with dual-energy x-ray absorptiometry of their children at age 9–10 years, and found that maternal vitamin D levels had no bearing on their children’s bone health.

Professor Ebeling said there had been a school of thought that low maternal vitamin D levels during pregnancy might have affected the programming of the child’s skeleton at around the age of 9 years, but this latest research had cast doubt on this theory.

He said there was still a need to identify and offer supplementation to women at moderate-to-severe risk of vitamin D deficiency to prevent their children from developing rickets.

“We have … seen an increase in rickets in children born of these high-risk groups in the western suburbs of Melbourne and Sydney”, he said.

Last year researchers estimated that the national incidence of vitamin D deficiency rickets among children in Australia was 4.9 per 100 000 children. (3)

A position statement on vitamin D and health in pregnancy and children, published in the MJA last month, recommended targeted screening of vitamin D levels during pregnancy. (4)

“The position statement recommends targeted screening in women with at least one risk factor — these being lack of skin exposure to sunlight, dark skin and conditions affecting vitamin D metabolism”, she said.

“The risk factors will capture potentially quite large numbers of women in the more southerly latitudes and allows for increased screening during the winter months, when women might be covered and not going outside as much”, Dr Paxton said.

Dr Paxton said the Lancet study was important because it analysed data from a large cohort of women and children, but it had some limitations, including a predominantly light-skinned cohort, representing a lower-risk group.

She said this latest evidence would not rule out the possibility of implementing universal screening for vitamin D levels in pregnancy in the future as further evidence became available on the health effects of low vitamin D and the impact of screening programs.

However, currently there was inadequate evidence to support universal screening, she said.

“This article is focused on bone health only and there are other potential benefits of making sure women have good vitamin D levels. There’s some evidence that vitamin D levels might be helpful for preventing pregnancy complications and there might be other non-bone effects on babies’ health.”

Professor Ebeling also said there was a possibility that low vitamin D during pregnancy might affect maternal outcomes. “It may be associated with an increased risk of pre-eclampsia and premature labour,” he said.