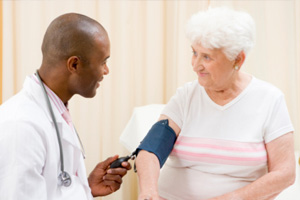 RESEARCH showing a 43% increased risk of hip fracture in the weeks after patients start antihypertensive therapy is a reminder to maintain caution when treating hypertension in older patients, say two Australian cardiology experts.

“Elderly people can be very sensitive to blood pressure-lowering medication and so the message is to be careful — start with a low dose and increase the medication slowly if needed”, Professor Amerena said.

The 10-year population-based, self-controlled case series trial of more than 300 000 community-dwelling elderly patients found 1463 hip fractures in the 45 days after the initiation of hypertensive drugs.

Professor Henry Krum, director of the Monash Centre of Cardiovascular Research and Education in Therapeutics, said primary care and geriatric care clinicians were attuned to the risk of falls with the initiation of antihypertensive medications, but this research reinforced the risks.

“The clinical message is to be very careful with the initiation and up-titration of these agents”, he told MJA InSight.

Professor Krum said he routinely checked lying and standing blood pressures in his hypertensive patients, and specifically asked about postural-type symptoms. “I am not sure busy clinicians in primary care all do that. I would suggest that they should.”

Professor Krum said he tended to be guided by a patient’s symptoms in determining if medication changes were needed. “lf there is a large postural drop, but the patient has no symptoms, I tend to let that go; but if a patient becomes symptomatic, I would then have to reduce the medication or at least manipulate the medications so that those symptoms are minimised or eliminated.”

However, he said the study raised “a lot of very interesting questions” about asymptomatic patients who experienced a postural drop.

“If [a patient has] a 30 mm postural drop, but doesn’t have symptoms, should you in fact reduce the medicines because clearly the patient is at increased risk of symptomatic postural hypotension, then falls, and then hip fracture?”

Professor Amerena said it was also important to be wary of so-called white-coat hypertension.

“You want to be sure that you’re treating a person who really does have high blood pressure”, Professor Amerena said. “If you put [a patient with white-coat hypertension] on blood pressure-lowering medication, then their blood pressure goes low when they’re at home and that can precipitate a fall.”

He said it was worth considering doing ambulatory blood pressure monitoring in elderly patients before starting treatment with antihypertensives.

Professor Krum said the research did not answer questions about whether the increased risk of falls and fracture was caused by the intrinsic properties of the medication or the postural hypotension induced by these drugs. However, he said the fact that fractures increased in the short-term added weight to the hypothesis that it was a haemodynamic effect.

“The study provides a bit more mechanistic clarity, but of course we don’t have things like blood pressures lying and standing, the relationship between the magnitude of blood pressure reduction and likelihood of hip fractures — all of which would be nice”, he said.