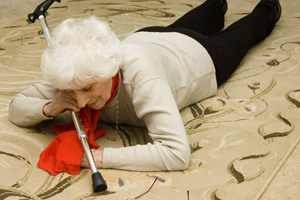 FALL prevention measures for the elderly, particularly in hospitals, may need revision in light of an observational study of more than 200 real-life falls in residential aged care facilities, according to Australian experts.

Canadian researchers reported in The Lancet that, among elderly people living in long-term care, the most common causes of falls were not slipping but incorrect shifting of body weight and tripping. (1)

“I agree that perhaps we have got our priorities wrong, especially in the hospital setting, where we should have more emphasis on exercise, balance and strength training, and lots more of them”, he said.

Professor Lord said because the study was the first to visually document falls in older frail people living in residential aged care and provide information on the mechanisms for falls in this group, it “has implications for fall and fall injury prevention strategies”.

The researchers found slipping was the least common cause of falls, accounting for just 3% of the falls in the study. In contrast, incorrect shifting of body weight accounted for 41% of falls — significantly more than for all other causes.

Tripping was the second most common cause, accounting for 21% of the falls, followed by hits or bumps, loss of support with an external object, and collapse or loss of consciousness, which each accounted for 11% of falls.

“Clinical assessments of fall risk rarely include external perturbations, and most laboratory-based studies simulate slips, which we showed account for only 3% of falls”, the researchers wrote.

The most common activity at the time of a fall was walking forward. Standing quietly and sitting down were also commonly associated with falls, the researchers found.

The falls were filmed only in common areas like dining rooms, lounges and hallways, not in bedrooms and bathrooms. According to the author of an accompanying commentary in The Lancet, more than 5% of falls in long-term care facilities occur in private areas. (2)

However, fewer than 10% of falls in such facilities were witnessed and even when they were, little detail was recorded on the context and circumstances of the fall, or what happened during the fall, the commentary said.

“This absence of understanding is one of the reasons why efforts to prevent falls have had little success, although some progress has been achieved.”

Professor Lindley said the researchers’ observations tallied with current evidence that the best fall prevention measures were interventions based on exercise and balance retraining.

“Clearly, balance retraining would be the most important intervention to prevent incorrect weight shifting”, he said.

Occupational therapy home modifications, often a priority of the hospital setting, were also found to be effective, especially for those with visual impairment, he said.

Professor Lord said the study built on previous work. “It has been often stated that most falls occur while walking. This study shows that many falls [also] occur while older people are standing still and also when undertaking activities like rising from a chair.

“This might indicate why tests of standing postural sway, controlled leaning balance and sit-to-stand ability are useful tests for predicting those at risk of falls”, he said.

Associate Professor Jacqueline Close, director of the Falls and Injury Prevention Group at NeuRA and a geriatrician at Prince of Wales Hospital, Sydney, said while the rate of hip fracture was decreasing in the community, it continued to increase in residential aged care facilities in Australia, particularly in men.

Effective approaches to intervention were needed such as ensuring residents were vitamin D replete, that they were not on medications associated with increasing risk of falls, and that the environment in which they functioned was optimised, she said.