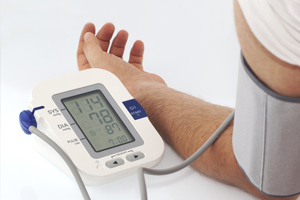 MEASURING blood pressure in the practice setting using the latest automated office measurement tools and methods can virtually eliminate the white-coat effect, according to the authors of an article published in the latest issue of the MJA. (1)

Multiple readings taken with a new class of automated sphygmomanometer while a patient rests quietly in the practice provides results that correlate more strongly with awake ambulatory BP values than routine manual readings, say the authors.

In Australia, about 20 000 automated sphygmomanometers have been distributed by the High Blood Pressure Research Council of Australia, mostly to GPs.

Canadian cardiologist, Dr Martin Myers and coauthors, wrote in the MJA that overdiagnosis of hypertension was reduced from 22% to 7% using this method compared with routine manual BP measurement.

The same cut-point for defining hypertension — 135/85 mmHg — could be used for automated office, awake ambulatory and home BP readings, the authors wrote.

“This approach should simplify the diagnosis of hypertension in contrast to manual BP measurement, which has a cut-point of 140/90 mmHg”, they wrote.

Dr Grenfell said although automated BP measurement could be a useful tool in some patients, blood pressure readings must be considered along with other risk factors, as per the absolute risk guidelines.

Regardless of the method used to measure BP, he noted global cardiovascular risk should be the basis for deciding on the need for antihypertensive therapy. Other factors had to be considered included age, sex, smoking status, dyslipidaemia, presence of target organ damage and coexisting diabetes mellitus.

Professor Mark Nelson, a coauthor of the paper, told MJA InSight that when there was no access to home BP equipment, the technique could be used to gain a good approximation to ambulatory daytime mean.

“The thresholds are lower because the technique minimises the white-coat effect — and that effect is often used as an excuse not to treat — and this should help confirm if the high readings are due to the white-coat effect or not”, said Professor Nelson, a senior member of the Menzies Research Institute Tasmania and chair of general practice at the University of Tasmania.

The authors wrote that more research was needed into automated office BP measurement in different patient populations and under a variety of clinical conditions.

They said cut-points for defining hypertension based on automated office BP should be confirmed by long-term, clinical outcome studies.