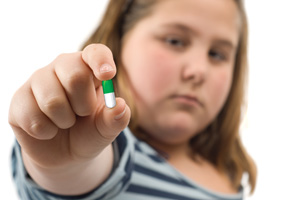 OBESE and overweight children may be in danger of paracetamol overdose, according to research that found “substantial confusion” among community pharmacists and carers about the correct dose for children who fell outside the average weight-for-age ranges.

The University of SA research, published in the European Journal of Hospital Pharmacy, found that Australian pharmacists and carers recommended vastly different paracetamol doses in hypothetical scenarios featuring febrile children who were overweight and obese. (1)

“Written instructions on the package inserts are often poorly understood, and they are ambiguous regarding what dose is appropriate for a child who does not fit into the average weight range listed on the medication label”, the researchers wrote.

“Whether or not this is appropriate practice is unclear, but it does highlight the need to develop simple, evidence-based guidelines for dosing these children”, the researchers wrote.

Dr Meredith Craigie, chair of the Paediatric Pain Working Party for the Faculty of Pain Medicine, Australian and New Zealand College of Anaesthetists, said there had been concern about paracetamol use in overweight children for some time.

“We really don’t have a good handle on the differences in liver metabolism that might occur, particularly in young children when they are unwell”, she said.  “Paracetamol is metabolised into a toxic metabolite if the liver is impaired for some reason.”

Liver impairment could occur in a child with a febrile illness or in cases of serious obesity when there had been fatty infiltration of the liver, she said.

Associate Professor Noel Cranswick, director of the Australian Paediatric Pharmacology Research Unit at Melbourne’s Royal Children’s Hospital, said rising childhood obesity made it difficult to determine the correct doses of not just paracetamol, but all drugs.

“With an increasing number of children who are above the normal weight for age, or weight for their height, there’s a difficulty in knowing how to dose them with different drugs”, he said.

Professor Cranswick cited the 2002 coronial inquest into the death of a 13-year-old NSW boy, who weighed 104 kg and died after receiving 31 g of paracetamol over 14 days. (2)

He said studies were under way to look into appropriate paracetamol dosing levels for obese children, which would help to inform guidelines and drug labelling. In the meantime, he said health professionals should dose children who were more than 20% overweight according to a weight-for-height-and-age calculation based on child growth charts. (3)

However, Professor Cranswick said this was a difficult calculation for carers, and suggested that carers of overweight children rely on the average weight-for-age dose recommendation on paracetamol packaging because this would result in a lower dose and reduce the chance of overdose. However, he cautioned that this was not appropriate for children who were small for their age.

In another warning related to childhood analgesics, the US Food and Drug Administration earlier this month recommended caution when prescribing codeine to children after tonsillectomy and/or adenoidectomy to address obstructive sleep apnoea. The FDA warning came after reports of children developing serious adverse effects, including three deaths, after taking codeine for pain relief after these procedures. (4)

Dr Craigie said the unpredictable nature of the metabolism of codeine, with some people not metabolising the drug at all and others metabolising it very quickly, meant codeine was moving out of favour.

Professor Cranswick agreed, noting that his hospital was phasing out the use of codeine this year.

He said there were several alternatives to this problematic medication. “Start with things such as paracetamol or ibuprofen”, he said. “If there’s a need for more specialised care, we would recommend other opiates, [such as] morphine or oxycodone, and there’s an increasing use in hospital settings of tramadol, even though it’s off-label.”