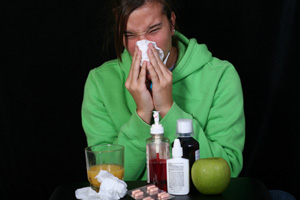 Antibiotic resistance may be seasonal

THE importance of community awareness campaigns to reduce antibiotic use for respiratory infections has been highlighted by a US study which found a seasonal link between prescriptions and resistance levels.

Researchers compared antibiotic retail sales data with resistance data from test results collected from 300 US laboratories. They found increased antibiotic use in winter could be correlated to increased resistance rates in Escherichia coli and Staphylococcus aureus a month later. (1)

Although increased antibiotic use in winter was largely due respiratory infections, the study, published in Clinical Infectious Diseases, showed increased resistance in these mainly non-respiratory pathogens.

The researchers said the strong associations seen in certain drug‒pathogen combinations suggested that “antibiotic use in the community has significant consequences for resistance in the hospital”.

Dr David Mitchell, senior staff specialist at the Centre for Infectious Diseases and Microbiology at Westmead Hospital, Sydney, said the finding added weight to the message that antibiotics should not be prescribed for winter viral respiratory infections.

“This reinforces the message that systemic antibiotics can select for resistance in bacteria throughout the body, not just those targeted by the doctor”, he said.

Professor Peter Collignon, director of the infectious diseases unit and microbiology at the Canberra Hospital, said the researchers’ finding that the seasonal changes to resistance were only short-term was a positive result.

“The bad news is that if you use antibiotics, you get higher levels of resistance, but the good news is that this resistance comes down again when you don’t use them”, he said.

“If we can get better at ensuring that only those who need antibiotics get them, not only will we be reducing the rise of resistance levels, they may even come down”.

Associate Professor Thomas Gottlieb, a senior specialist in microbiology and infectious diseases at Concord Hospital, Sydney, said the link between antibiotic overuse in the community and antibiotic resistance found in the study added strong support for current NPS campaigns to change community attitudes to antibiotic use, targeting both GPs and the community in general.

He said to address the problem more broadly, more information was needed about the cultural attitudes driving the propensity to use antibiotics so they could be addressed.

“At the end of the day, we need public strategies in a number of arenas, including controlling unnecessary human use in respiratory infections”, Professor Gottlieb said.