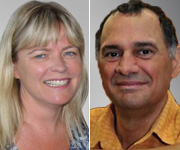 IT’S been a big year for reflecting on the status and rights of Indigenous Australians: 2012 marks the 40th anniversary of the Aboriginal Tent Embassy, and 30 years since the Mabo decision to recognise Indigenous land rights.

We have also had a commitment from our Prime Minister to hold a national referendum on the constitutional recognition of Indigenous Australians by 2013.

It’s tempting to see these as political issues, but the two prominent Indigenous leaders writing in a themed issue of the MJA argue that they are inextricably linked with health.

President of the Australian Indigenous Doctors’ Association, Peter O’Mara, says “Self-determination is essential to improving Indigenous health and wellbeing. Self-determination means equal entitlement to be in control of our own destinies while living with governing institutions.”

From across the Tasman, Sir Mason Durie explains that the Treaty of Waitangi was drawn up between Maori and the Crown in 1840 so that Maori would enjoy the same “rights and privileges” as other New Zealanders. It now includes a requirement to ensure Maori participation in decisions about, and delivery of, health services.

While there is still much to be done, a number of health indicators have improved and, just as importantly, attitudes have changed, transforming Maori into active participants in health policy and health care.

Forty years after four Aboriginal men marched to Canberra and set up an “embassy” because they felt like foreigners in their own land, disempowerment remains a major determinant of health for Indigenous Australians.

Indigenous self-determination needs to include control over health research, from concept to completion and feedback. Ten experienced Indigenous health researchers provide 10 principles for achieving this.

Their advice is complemented by that of six Indigenous Research Fellows, who have written about their “on the ground” experiences conducting research in Indigenous communities. Genetic research has been especially problematic, with some studies in the past fuelling divisiveness and racism.

In a “Perspectives” article, Dr Emma Kowal reports that, with attention to many of the principles described above, progress in this area is tentative but positive.

Few people in Australian society are more powerless than prison inmates, and Aboriginal and Torres Strait Islander people, although they comprise only about 2.3% of the population, make up a quarter of all those in prison. There are complex reasons for this: a number of transgenerational factors such as invasion, dispossession of land and the stolen generation have resulted in social and economic disadvantage, coupled with problematic use of alcohol and other drugs.

When researchers studied a representative sample of Aboriginal and Torres Strait Islander people in Queensland prisons, they found that the 12-month prevalence of mental disorders was 73% for men and 86% for women, which included rates of anxiety, depression and psychosis well above community norms. More than two-thirds of the sample was affected by a substance misuse disorder.

This points to an urgent need for culturally appropriate mental health, alcohol and drug programs in prisons. Staying out of prison would also be good.

In Queensland, a project that promotes self-determination in the justice system is the Murri Court — where Indigenous Elders take part in the sentencing of Aboriginal and Torres Strait Islander people who have pleaded guilty to minor (mostly alcohol- and drug-related) offences.

The referendum to recognise Indigenous Australians in the constitution is imminent, but it is at risk of failing: only eight referenda out of 44 since Federation have been successful. Bipartisan support is essential and this seems unlikely in today’s toxic political landscape.

Whatever the outcome, one thing is certain: those who care about the health of Indigenous Australians should do everything they can to support initiatives that promote genuine self-determination.