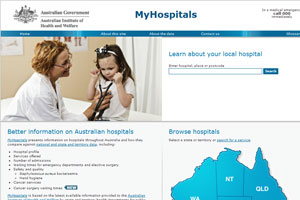 In two separate letters published in the latest issue of the MJA, the authors said presentation of data about health care-associated Staphylococcus aureus bacteraemia (HCA-SAB) on the hospital comparison site were overly simplistic.

The author of one letter told MJA InSight that if data on the website were not valid, it risked the ability for it to drive positive change in hospitals.

Dr Leon Worth and coauthors, of the Peter MacCallum Cancer Centre in Melbourne, wrote in the MJA letter that HCA-SAB data on the website did not account for hospitals that accommodate specialised patient populations. (1)

The authors said that while a surveillance strategy and target rates were to be applauded, these must include risk stratification to ensure that disparate patient subgroups, such as immunocompromised patient populations, were adequately compared.

“In the case of SAB, an important contributing risk factor is the presence of an indwelling venous catheter. If frequent or prolonged catheterisation is required, as in patients requiring total parenteral nutrition, haemodialysis or chemotherapy, this must be reported in tandem with infection rates. We note no such consideration in the recent MyHospitals report”, they wrote.

In the second letter, Dr Geoffrey Playford, of the Princess Alexandra Hospital in Brisbane, and coauthors compared rates of hand hygiene (HH) compliance and HCA-SAB — considered a key indicator of HH compliance by the National Hand Hygiene Initiative — as reported on the MyHospitals website. (2)

They said the comparison showed the two appeared to be counterintuitively positively correlated: hospitals with greater HH compliance showed higher HCA-SAB rates. In light of their analysis, the authors said the two should no longer be associated with each other.

“This counterintuitive relationship highlights the erroneous use of HCA-SAB as an indicator or the impact of HH compliance, as there are multiple other important causes of HCA-SAB. In the absence of a reliable indicator, HH should instead be evaluated simply by compliance”, the authors wrote.

“With the media scrutiny of hospitals with HH compliance below the benchmark, it would be unfortunate if hospitals focused only on HH at the expense of other strategies, simply to achieve the HH benchmark and avert negative publicity.”.

Ms Alison Verhoeven, a senior executive with the Australian Institute of Health and Welfare’s governance and communications group, said reporting of SAB and HH data on the MyHospitals website had been informed by monitoring work conducted by the Australian Commission on Safety and Quality in Health Care.

The commission had advised the inclusion of the 70% benchmark for HH and a benchmark of 2.0 cases of SAB per 10 000 patient days was included in the National Healthcare Agreement, she said.

“Analysis undertaken by AIHW suggests that for the 213 public hospitals for which the data are reported on MyHospitals, and for the 85 hospitals regarded as ‘peer group A’ hospitals (principal referral and specialist women’s and children’s hospitals) for national hospital statistics reports, there is an association between higher rates of hand hygiene and lower SAB rates”, she said.

However, Dr Playford told MJA InSight that the direct linkage of SAB to HH compliance did not have a strong evidence base.

“We say hand hygiene is important, but unless there is a good indicator — and SAB doesn’t appear to be — then they shouldn’t be linked” he said.

“Infection control programs are very complex multimodal interventions and it’s difficult to standardise how you measure the program.”

Dr Worth told MJA InSight that MyHospitals data currently implied that all hospitals were alike.

“This means that not only are comparisons not valid, but we also lose the ability for key stakeholders to drive change if data are regarded as invalid or unreliable”, Dr Worth said.

“Public reporting is a positive step forward and I’m in favour of it, but at this point we need to be very quick to refine it to ensure that the data are valid and can be used to bring about improved patient care.”