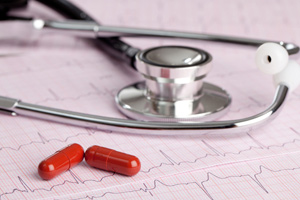 “Rhythm versus rate” in AF

An observational study, published in the Archives of Internal Medicine, showed little difference in mortality between the two therapies in the first 4 years of treatment, as shown in earlier studies, but found that rhythm control therapy was superior to rate control in the long term. (1)

The Canadian study used population-based databases from Quebec, Canada, from 1999 to 2007 to analyse mortality in 26 130 patients aged 66 years or older hospitalised with atrial fibrillation (AF), who did not have an AF-related drug prescription before admission but who received a prescription within 7 days of discharge.

The researchers found that in the first 4 years after treatment was initiated mortality results were similar to those from recent clinical trials but there was a long-term protective effect for rhythm control drugs.

“The risk reduction associated with rhythm control therapy was even more pronounced among the subset of patients who maintained their initial treatment with antiarrhythmic medication over longer periods of time, suggesting that the use of rhythm control therapy may be beneficial for patients with AF in whom antiarrhythmic drugs are effective and well tolerated”, they wrote.

“The results suggest that the development of antiarrhythmic drugs with fewer adverse effects but retained or improved efficacy may result in important gains in the survival of patients with AF.”

Randomised trial results over the past decade examining the efficacy of rhythm compared with rate control have failed to demonstrate a mortality benefit of either strategy over the other.

An accompanying editorial said the findings were “provocative” but insufficient to recommend a universal rhythm control strategy for all patients with AF. (2)

“The current study may heighten speculation as to whether safer and more efficacious therapies to restore sinus rhythm, when administered in conjunction with contemporary anticoagulation strategies, result in demonstrable patient benefit”, the author said.

Current practice in Australia was to aim for moderate rate control in persistent or permanent AF, Dr Christian Mussap, a cardiology staff specialist at Liverpool Hospital in Sydney and conjoint senior lecturer at the University of NSW, told MJA InSight.

Although the study involved a large number of patients and assessed real-world outcomes based on contemporary practice, it had the usual limitations of an observational study, Dr Mussap said.

“Remember that unfactored covariables can profoundly impact data analysis. So the main finding of reduced long-term mortality in the rhythm control cohort should be interpreted cautiously, especially since it contradicts the randomised trial data.

“Moreover, our appreciation of the importance of anticoagulation has altered, and the more prolonged use of warfarin may have conferred a mortality benefit in favour of the rhythm group.”

Dr Mussap said high mortality in the first year in the rhythm control group was a concern that could not be ignored. There was also a high cross-over to the rate control group “likely due to toxicity issues”.

“I don’t think this study will change local practice at this time, but our perspective may change as more potent and less toxic antiarrhythmic drugs come to our disposal”, he said.

Professor Ric Day, a clinical pharmacologist at the University of NSW, said the study was interesting and provocative, but more work was needed.

He noted the small effect size of the difference between rhythm versus rate treatments, and some subtle differences in the two groups that were always difficult to account for in observational studies, such as confounding by indication for treatment and trends in care over the time the study was carried out.

“For example, the increasing popularity of ablative procedures is a trend that is difficult to control for during the study with even the most sophisticated statistical approaches, and cessation of anticoagulants in patients whose rhythm was controlled could have been influential in the contrast in deaths between the treatments”, he said.