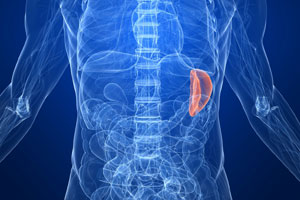 A LARGE Australian study gives a broad insight into infection outcomes in patients who have undergone splenectomy, showing the 2 years after surgery are the most risky. (1)

Published online today in the MJA, the Victorian-based study showed the incidence of severe infection and all-cause mortality following splenectomy was highest in the elderly and those with malignancy. Trauma patients had the lowest rates of infection.

The authors said the study identified patient groups at highest risk for adverse outcomes and could be used to guide management decisions.

A commentary published with the study highlighted the importance of vaccination for splenectomy patients, as well as the need for counselling and information about infection risk. (2)

The study included 2472 adult patients who had undergone splenectomy in Victoria over an 8-year period from July 1998 to December 2006. The most common reasons for splenectomy were trauma (25.7%) and therapeutic haematological indications (23.6%).

The study authors said severe infection requiring hospitalisation was reported in 26% of the patients, with these occurring at a mean of 3.5 years after splenectomy. Women, those aged less than 50 years and those having splenectomy due to trauma had significantly lower rates of first infection.

The authors said the rate of first severe infection declined over time, but first infections did continue to occur late.

Respiratory infection and sepsis (proven or presumed bloodstream infections) were the most common infections, with gram-negative infections accounting for 51% of bacterial pathogens and Staphylococcus aureus for 31% of infections.

The authors noted that the predominance of gram-negative organisms and S. aureus, and lower rates of encapsulated organisms such as Streptococcus pneumoniae and Haemophilus influenzae which are generally associated with sepsis in splenectomised patients, might represent uptake of vaccination and antibiotic prophylaxis in Victoria or a changing pattern of postsplenectomy infections.

“Vaccination, education and antibiotic prophylaxis are recognised as reducing the risk of postsplenectomy sepsis and death”, the authors said.

“Overwhelming postsplenectomy infection is a rare but frequently fatal complication, usually caused by Streptococcus pneumoniae. Vaccinations against pneumococcus, Haemophilus influenzae and Neisseria meningitides are widely recommended as a low-risk intervention that can be applied relatively easily in the hospital setting”, they said.

At the Princess Alexandra Hospital in Brisbane, all splenectomy patients were automatically referred to the infection management service by the operating theatre electronic record.

“Vaccinations are offered and administered, together with counselling and information about infection risk. We estimate near 100% coverage over the past 10 years (unpublished data)”, the commentary authors wrote.

However, they agreed antibiotic prophylaxis was a more controversial intervention, particularly in those with lower risks, such as those having splenectomy due to trauma.

“In order to develop modern evidence-based recommendations for vaccination and prophylactic antibiotic regimens, future prospective studies will need to determine the attributable risk of the various types of infection from splenectomy in diverse patient groups”, they said.