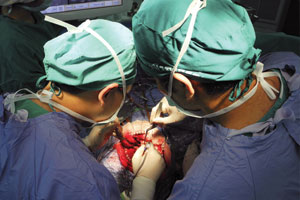 THE benefits of laparoscopic abdominal and pelvic surgery last longer than expected according to a study which found the less invasive technique correlated with fewer incidents of small-bowel obstruction over time.

Researchers analysed data on more than 100 000 patients in Sweden and found that patients undergoing open surgery were four times more likely than those undergoing laparoscopic surgery to develop small bowel obstruction (SBO) in the ensuing 5 years.

The population-based retrospective register review was published in Archives of Surgery. (1)

The researchers found the reduced risks held true for a number of commonly performed procedures including cholecystectomy, bowel resection and appendectomy, even after accounting for other factors such as age, comorbidity and previous surgery.

“Of the possible factors to examine in a population-based registry, our study identified the surgical technique, open vs laparoscopic, to be one of the more important for the risk of SBO”, the authors wrote.

“Adhesion-related morbidity is related to substantial health care costs and, as a complication of surgery, it is becoming a medicolegal issue.

“Reduction of adhesion-related morbidity, such as SBO, is thus of importance for patients as well as for society.”

According to a critique of the study in the same issue of the Archives of Surgery, the short-term benefits of laparoscopy, such as shorter hospital stay, less postoperative pain and a faster recovery, have been well documented, but this study showed that the benefits extended beyond the immediate postoperative period. (2)

“For surgeons, it highlights another potential benefit of minimally invasive surgery and challenges us to continue to offer less invasive procedures whenever they are feasible. For payers and health care policy leaders, it suggests that substantial cost savings could be achieved if open surgery was replaced with laparoscopic surgery more often”, they wrote.

Dr Jon Gani, a general and abdominal surgeon in Newcastle, NSW, said the study added weight to the growing body of evidence that laparoscopic surgery had long-term benefits.

“Even though it’s not a prospective randomised control trial, it’s a powerful piece of evidence because of its size”, he said.

Laparoscopic surgery is already well entrenched in Australia as the preferred approach for most of the abdominal surgeries studied, Dr Gani said.

However, he noted some exceptions. “There are always situations where the disease process is too complicated to manage safely using laparoscopy. You might commence it laparoscopically and discover that it is not safe to proceed that way”, he said.

Dr Gani said although it was not feasible to up-skill every member of the surgical workforce, many of today’s surgical trainees felt more confident with laparoscopy than with open surgery, so natural attrition would boost rates over time.

“There is a flipside to this revolution. Nowadays, junior surgeons are not getting as much practice with open surgery as they used to and would welcome the opportunity to do more”, he said.