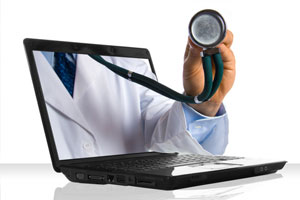 A NEW US study which showed “underwhelming” clinical outcomes from telemonitoring still adds to the knowledge base about telehealth and should not dissuade doctors from its benefits, according to Australian experts.

Professor Len Gray, director of the Centre for Online Health at the University of Queensland, said the study, published in Archives of Internal Medicine, was well designed but examined only clinical outcomes, when there were many other potential benefits of telehealth. (1)

In the trial, 205 older adults with multiple illnesses were randomly allocated to receive usual self-directed care, or daily sessions of telemonitoring for assessment of symptoms and measurement of biometrics such as weight, blood pressure, blood glucose levels, oximetry and peak flow, with the use of videoconferencing.

In the 12 months following enrolment there were no differences in rates of hospitalisation and emergency department visits between patients receiving telemonitoring and those receiving usual care.

The study authors said the results provided “further evidence of a lack of efficacy of telemonitoring on hospitalisations and ED visits”.

“Given the potential costs of telemonitoring and the lack of efficacy, it may be important for physicians and funding organizations to evaluate which patient groups might be most responsive and which implementation strategies will be most useful”, they said.

Professor Gray said telehealth came in many forms and had an array of outcomes other than clinical, such as lowering costs for patients and allowing doctors to be more efficient, which were not measured by this study.

He said that in Australia the goals of telehealth were not necessarily confined to clinical improvements but were also about providing health services to rural and remote communities and increasing efficiency for doctors.

“In a lot of telehealth interactions, the clinical outcomes are the same [as without telehealth services] but it can cost much less to provide that service. For example, a rural patient who can have a telehealth consultation may have the same outcome but they don’t have the cost of travelling”, Professor Gray said.

Another benefit would be a specialist who could use telehealth rather than travelling to rural areas, meaning they could see more patients, who would not be considered in any trial results.

AMA president Dr Steve Hambleton said the study highlighted the need for caution in the use of telehealth, but he questioned whether selection bias may have skewed the results.

The study involved people aged over 60 years enrolled in the Mayo Clinic’s Employee and Community Health program. Dr Hambleton said 513 people were invited to take part, yet only 205 agreed and he suspected these would have been people who were health literate.

However, he was still surprised at the results of the US study as early results from a large UK study involving more than 6000 patients had shown substantial reductions in mortality and a 20% reduction in emergency admissions of people using telehealth services. (2)

Dr Hambleton said although the UK study had not yet been peer reviewed, it involved a greater variety of telehealth uses and patients than the US study.

Professor Gray said he was also interested in the UK study, but it was not possible to assess the results so far because there was limited information.

He advised doctors considering telehealth services to have a clear set of objectives of what could be achieved. “You have to think of it as multidimensional”, he said.

An editorial in the same issue of Archives of Internal Medicine said the US study joined a growing body of literature suggesting that home telehealth does not reduce readmissions or ED visits. (3)

“The somewhat underwhelming results aside, the accumulating evidence should not necessarily be taken as a blanket indictment of a potential useful technology”, the editorial said.

Professor Gray said he agreed with the editorial, which said there should be careful thought given to the appropriate outcomes that telehealth programs aim to effect.