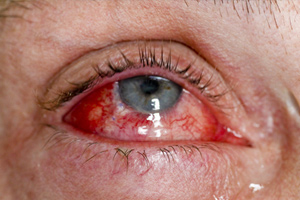 RESEARCHERS who found a link between ocular inflammatory diseases and first-time oral bisphosphonate use have urged clinicians to advise patients about the signs and symptoms of these conditions.

The research is the first epidemiological cohort study to confirm the association between bisphosphonates and ocular inflammatory adverse events, such as uveitis and scleritis, although some earlier reports have noted the link. (1)

In performing the retrospective cohort study, the researchers were able to link the prescription records of 934 147 Canadians who had visited an ophthalmologist between January 2000 and December 2007 with their clinical records. Included in the cohort were 10 827 first-time bisphosphonate users.

The researchers said the release of inflammatory mediators was believed to be the possible mechanism for bisphosphonate-induced inflammatory events.

They said clinicians need to inform patients taking bisphosphonates of the signs and symptoms of these conditions so they can immediately seek assessment by an ophthalmologist. Early intervention may reduce or prevent complications.

“Bisphosphonate-induced uveitis and scleritis are potentially reversible conditions, if there is early intervention by an ophthalmologist”, they wrote.

Ophthalmologist Professor Peter McCluskey, from the Royal Australian and New Zealand College of Ophthalmologists, said that in his experience, ocular inflammation was an uncommon but important side effect of bisphosphonate use.

“This is not something that happens after people have been on bisphosphonates for a while. If someone has recently started them and has developed inflammation for the first time, that’s when you think there may be a link”, he said.

Professor McCluskey said that ocular adverse events seemed to be more common with intravenous bisphosphonate use, although the problem had been described with all forms of the drug.

Professor McCluskey said patients should be cognisant of some specific symptoms.

“It’s extremely uncommon so it should not put doctors off prescribing [bisphosphonates] to people who need them, but patients experiencing red eyes, light sensitivity, eye pain or blurred vision after starting bisphosphonates do need to be evaluated by an ophthalmologist”, he said.