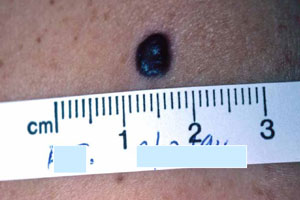 The comments come in response to a study published in The Lancet, which found that a 2 cm resection margin was as safe as a 4 cm margin for cutaneous melanomas thicker than 2 mm. (1)

The study of 936 people with thick melanomas who were randomly allocated to treatment with a 2 cm margin or a 4 cm margin, found no significant difference in overall survival or the risk of recurrence or death due to melanoma in the two groups.

The authors of the study, which recruited patients from 53 hospitals in Sweden, Denmark, Estonia and Norway, said most international guidelines suggested an excision margin of 2-3 cm for thick tumours but evidence supporting the recommendation was scarce.

Professor John Thompson, executive director of the Melanoma Institute Australia, coauthored a linked comment in The Lancet, saying that the next question to be addressed was whether a 2 cm margin was preferable to a 1 cm margin. (2)

“Morbidity and healthcare costs could be decreased if a 1-cm margin is equivalent or non-inferior to a 2-cm margin. A proposal for such a large scale, multicentre trial is being developed”, he wrote.

He said that despite more than a century of debate, the optimum excision margins for cutaneous melanoma were still unclear.

“A wider excision margin might be oncologically safer, but the closure method needed is more often a skin graft or a complex flap, resulting in greater morbidity and increased cost compared with a narrow margin”, Professor Thompson said.

“In one large trial, 46% of patients treated with 4-cm margins had a skin graft compared with only 11% with 2-cm margins.”

The Lancet authors said their study was the largest randomised controlled trial of resection margins for thick melanomas. “Our results are the best evidence yet about the size of surgical margins”, they wrote.

Dr John Kelly, director of the Victorian Melanoma Service at The Alfred in Melbourne, said earlier studies had also shown that a 2 cm margin was safe for melanomas thicker than 2 mm, but he agreed with Professor Thompson that it was time to look into using a 1 cm margin.

“Whether 1 cm is a sufficient margin, that’s the question”, Dr Kelly said.

He said Australian specialists were looking at the feasibility of a multicentre, global collaborative trial examining the 1 cm issue.

However, Dr Kelly said The Lancet study was unlikely to change practice in Australia.

“Already, a lot of people are doing 1 cm margins for tumours between 2 mm and 4 mm thick, so 2 cm is more than what most people would do”, he said, adding that the NHMRC melanoma guidelines encompassed excision margins narrower than 2 cm. (3)