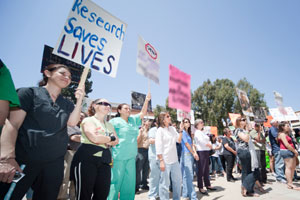 THE record investment in health and medical research, announced by the federal government last week, is being claimed as a win by researchers who lobbied against rumoured funding cuts earlier this year.

Last week the Federal Department of Health and Ageing announced funding of $673.7 million for 1140 research grants through the National Health and Medical Research Council. (1)

Earlier this year rumours were rife that the federal budget would cut research funding by $400 million over 3 years, prompting intense campaigning by researchers and the community.

In May, Professor Garry Jennings, director of the Baker IDI Heart and Diabetes Institute, coauthored an editorial in the MJA calling on clinicians to join the fight against the potential cuts. (2)

He told MJA InSight he was “absolutely delighted” by last week’s funding announcement, with his own institution receiving $21 million in grant funding, up from $15 million in 2010.

“It’s a win for the country because there’s no question the health system has never needed research and development like we need it now”, he said.

Professor Jennings said the immense public and research sector response to the rumoured cuts earlier this year was a “huge morale boost” for researchers.

“I think the government would probably think twice before making major cuts to research budget in the future.”

Professor Jennings said he was unaware of the source of the funding cut rumours, although it was reputed to be a cabinet leak. He would not be drawn on suggestions that the leak was a “strategic” move by the government to soften expectations before the budget.

Professor Nicholas Graves, professor of health economics at the Queensland University of Technology, said he “liked to think” the government realised the researchers’ campaign had a point.

“We had a well coordinated campaign, we mobilised the media well and we had some high profile researchers and patient advocates. That may have contributed”, he said.

Professor Graves discussed the economic costs of the rumoured cuts in a comment piece for MJA InSight in April. (3)

Both experts have also welcomed the government’s recent announcement of a review to develop a 10-year strategic health and medical research plan for Australia. (4)

Professor Graves said the review presented a good opportunity to “modernise” the allocation of research funding.

He recently co-authored a paper in the BMJ which found there was an element of “randomness” in review panel decisions about which research proposals to fund. (5)

“Panels … are good at picking off the best grant proposals and the poor quality proposals, but it’s hard for them to distinguish between grants in the middle group. There is an element of luck”, said Professor Graves, who has been on grant review panels for the NHMRC.

He suggested that the randomness of funding decisions could be “embraced” as part of the formal process, such that proposals in the middle group received funding based on a random draw.

The application process could also be simplified, he said. Currently NHMRC applications are 70-120 pages long, with researchers spending a median of 22 days preparing each grant proposal. The BMJ paper estimated that in 2009, 180 researcher years were spent preparing grant applications.

4. Australian Government: Review of health and medical research in Australia