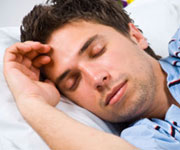 A bad night's sleep may be fatal

A NEW study highlights that sleep disturbance may not be as benign as clinicians tend to think, with the potential for a lethal outcome, a leading psychiatrist has warned.

Professor Philip Mitchell, head of psychiatry at the University of NSW and consultant psychiatrist at the Black Dog Institute in NSW, was commenting on research that shows men who experience at least three of several types of sleep disturbance, including lying awake most of the night and sleeping badly, are at five times higher risk of committing suicide than men who have no difficulty sleeping.

The research, reported in the American Journal of Epidemiology, found men with sleep disturbance also have a higher overall mortality risk, especially those under 45 years of age.(1)

Women with sleep disturbances were not at higher risk than other women.

The study also found that men and women with sleep disturbances were more likely to develop hypertension and diabetes.

The study was based on the GAZEL cohort, a large number of French employees of Electricity of France–Gas of France, and involved almost 17 000 men and women who were followed for 19 years to 2009 with validated measures of sleep disturbances.

A total of 1045 participants died during follow-up.

“Even in this relatively young cohort, we found the higher incidences of mortality to be most pronounced among younger men who reported sleep disturbances,” the authors said.

“This indicated that sleep architecture may change over time, making sleep disturbances at younger ages more deleterious to health than those at older ages.”

The link between disturbed sleep and suicide in men might partly be explained by the high correlation between sleep disturbances, depression and suicidal ideation seen in previous studies, the authors said.

Professor Mitchell said the study was interesting but the most likely explanation for the relationship between sleep disturbance and suicide was clearly depression.

Professor Mitchell says the take-home message was that if a male presented with significant sleep disturbance, clinicians should be aware of the high risk for depression and look carefully for signs of primary or secondary depressive illness.

“It highlights that sleep disturbance isn’t perhaps as benign as clinicians tend to think it is and it is something that has a potential lethal outcome,” he said.

“If there is no depression, then perhaps look for (another) cause of the sleep disturbance.”

Dr Nielssen said while any screening for emotional disturbances should include a question about sleep, a sleep screen might not necessarily identify patients at risk of suicide.

“I would be looking for depressed men with substance abuse disorders who have made a suicide attempt, and treating their disorders.”

Dr Nielssen said the limitations of the GAZEL study included the inability from the way the data were collected to say whether suicide was more likely to take place at the same time sleep was disturbed.