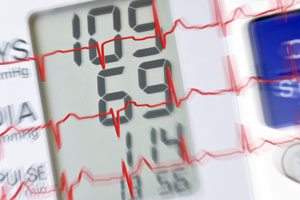 A CALL by US researchers to increase the cut-off value for hypotension in elderly trauma patients has received a cautious response from Australian experts.

The authors of a study in the Archives of Surgery found the optimal emergency department systolic blood pressure (BP) cut-off value for predicting mortality in patients aged 65 years or older was 117 mm Hg. (1)

“As the elderly population rapidly increases … it is critical to reassess the present definition of hypotension, specifically in the elderly.”

The study analysed a US nationwide database of 902 852 patients for any correlation between admission BP with subsequent death as a result of traumatic injury.

The optimal cut-offs were 85 mmHg for patients aged 18 to 35 years and 96 mm Hg for patients aged 36 to 64 years, leading the authors to recommend that the classic definition of hypotension as an emergency department systolic BP less than 90 mmHg remained optimal for patients younger than 65 years.

However, they found that about two-thirds of patients older than 60 years had pre-existing systolic hypertension. “Consequently, elderly trauma patients with normal BP measurements may actually be in a significant state of shock,” they said.

An accompanying critique said although the study was “elegantly performed … the message to the bedside caregiver is unclear”. (2)

The critique author said the point made by the large data set analysis was not that a BP of 117 mmHg was a magic number but that mortality in the elderly patient may have more to do with what happens after the initial stages of resuscitation than what can be predicted by a single vital sign measured once at the time of arrival.

Dr Deepak Bhonagiri, an intensivist at Liverpool Hospital, Sydney, said he supported the proposition that “hypotension” be redefined in the elderly if only to reduce the risk of inadequate assessment or lack of resuscitation.

The elderly were a heterogeneous and dynamically changing group and their BP would vary according to their physiological status, comorbidities and stressors at the time of BP measurement, he said.

“A study such as this highlights the fact that parameters like blood pressure are not [easy to generalise], especially in the elderly, and when blood pressure measurements are undertaken and acted upon, clinicians should be aware of pseudonormal blood pressures and use their clinical judgements, changes in blood pressure and other investigations to direct their therapies,” Dr Bhonagiri said.

Professor Steve Webb, senior staff specialist in intensive care medicine at Royal Perth Hospital, said the study might be trying to provide a solution to a problem that did not necessarily exist. It might not be that the BP threshold was wrong but that different factors drove mortality in different age groups.

“Death in the elderly after trauma may be much more driven by comorbidity, noting that [the study’s definition of] trauma included falls”, he said.

“Additionally, the nature of the trauma is quite different in the three age groups with much less penetrating trauma in the elderly and … it is quite plausible that this is the explanation for the different relationship between threshold BP and mortality”, Professor Webb said.

Dr Bhonagiri said the demographics of the elderly in the study were markedly different from the two younger subgroups with significantly more white, female and government-insured patients. The injury severity scores were also different in the elderly.

“These points should also be noted while applying the results of this study to any Australasian population”, he said.