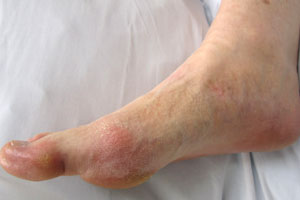 DOCTORS should throw out traditional advice — to treat acute gout by dosing with colchicine until the patient is better or develops diarrhoea — and stick to the new low-dose guidelines, following recent cases of death and morbidity, experts say.

And they have warned that renal function in the elderly should be measured before the drug is prescribed. There is no antidote to toxicity from an overdose and the only treatment is supportive.

However, Professor Richard Day, director of clinical pharmacology at St Vincent’s Hospital, Sydney, said although colchicine could be lethal, it was safe as long as it was only used in low doses.

Professor Day is coauthor of a letter in this week’s MJA, which outlined three cases of toxicity from supratherapeutic dosing that all occurred in the same fortnight, with two patients recovering and the third dying from multiorgan failure. (1)

Two of the patients were taking more medicine than prescribed or directed by their doctor.

The letter reports that a recent randomised controlled trial showed that low-dose colchicine (1.8 mg over 1 hour) was as effective as a higher dose (4.8 mg over 6 hours), with adverse effects similar to placebo and much lower than those of the higher dose.

Professor Day said the new Australian dosing guideline, introduced last year, was to use 1.0 mg initially and 0.5 mg one hour later. The total course of 1.5 mg should not be repeated within three days. (2)

“Unfortunately, the product information has not caught up with these guidelines yet”, he said.

A potential solution to overdosing was to dispense only three 0.5 mg tablets at a time if the prescriber was worried that the patient might not remember these important dosing instructions, Professor Day said.

And patients should be warned to keep the drug locked away from children. “One of the most upsetting things is when children get hold of the tablets in the cupboard”, he said.

Colchicine was useful in patients with recurrent gout as a low-dose prophylactic against intermittent attacks while they were stabilised on uric acid-lowering drugs such as allopurinol, he said. The prophylactic dose was 0.5 mg once or twice per day, the lower dose being better in the elderly and those with renal impairment.

Severe renal impairment (creatinine clearance of less than 30 mL/min) is a contraindication.

If colchicine was used to treat acute gout, doctors should follow the new prescribing guideline and warn patients not to exceed the dose, Professor Day said.

“There has been always a worry and an appreciation of the difference between a toxic dose and an efficacious dose, which for colchicine is pretty small”, he said. “Patients should be warned to stop colchicine if nausea or vomiting occurs.”

The alternatives were to prescribe non-steroidal anti-inflammatory drugs (NSAIDs), such as indomethacin, or prednisone for 35 days but these could cause problems, especially in the elderly with comorbidities. “If you have got an older person with heart failure, or hypertension, or kidney problems, NSAIDs are not a good option because they can make those things worse”, Professor Day said.

Cortisone was an alternative in such patients but it could exacerbate high blood pressure or diabetes.

Professor Day said doctors should access the Australian medicines handbook to check on dosing schedules for the drugs they prescribed. “One click and they are into it”, he said.

“And I think doctors should keep close to the National Prescribing Service (NPS) and see what messages they are getting out.” (3)

NPS Quality Use of Medicine program clinical adviser, Dr Danielle Stowasser, said it was important for doctors to measure renal function in elderly patients before prescribing colchicine because it was contraindicated in severe renal impairment.